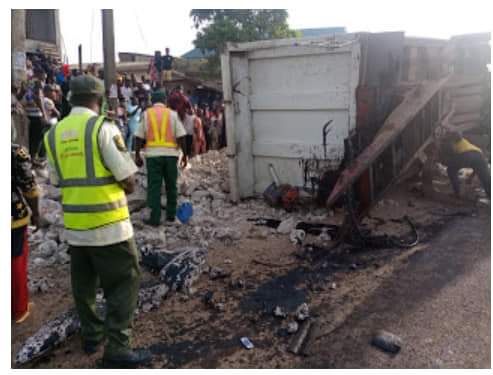 An unfortunate event occurred in the Ado-Odo/Ota Local Government Council area of Ogun State early on Friday, 26 March 2021 when the husband of a  lecturer with Covenant University, Canaanland, Ota, Ogun State, was crushed to death by a falling granite loaded truck at Iyana-Iyesi.

According to eye witness accounts, the man identified as Engineer Foluso Badejo, and husband of Joke Badejo, had just dropped his children in their school and parked at the Iyana-Iyesi bus stop.

He was waiting at the bus stop to pick some of his co-workers when the tragedy occurred.

It was later gathered that the moving tipper truck while trying to manoeuvre his way suddenly had the bucket of the tipper fall with the granite falling on the car parked by the roadside with Badejo inside and a commercial tricycle with registration number NND 14 OD TVS injuring the driver.

The driver of the tipper however escaped with the head part of the truck, having realised the magnitude of the accident.

Adekunle also said that the driver cannot keep running forever since people were able to track down his vehicle registration number.

The Area Commander also disclosed late Badejo’s corpse had been deposited at the state Mortuary, Ifo while the injured victims have been taken to the General Hospital, Ota.