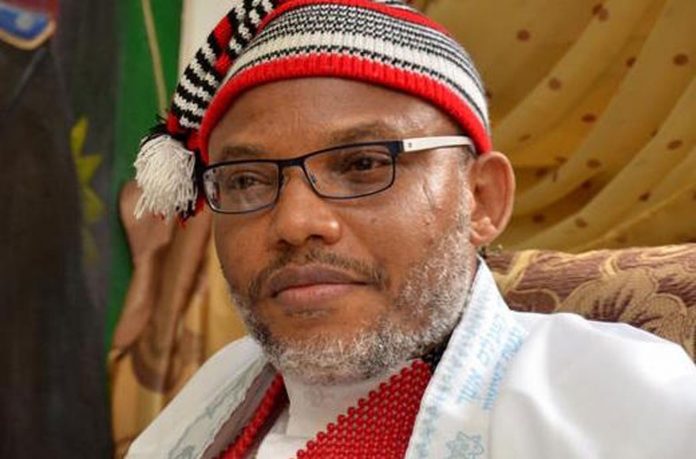 The Arewa Youth Consultative Forum, AYCF, has launched an attack against Nnamdi Kanu, leader of the Indigenous People of Biafra, IPOB.

In an interview with DAILY POST, Shettima stressed that Kanu was being sponsored to destabilize Nigeria.

He called on the Federal Government to ensure that the IPOB leader is repatriated back to Nigeria “to face the music” of his actions.

Shettima also urged the Federal Government to listen to those genuinely agitating for both Biafra and Oduduwa Republic.

According to the AYCF National President: “The agitation for Biafra and Oduduwa Republic can permanently be sealed off when there is the spirit of justice to all and commitment on the part of the government to ensure that everybody is brought on board to resolve issues amicably.

“Though some are not genuine in their agitations, some are doing it for their selfish interest, while some are being sponsored.

“But those who are genuinely agitating, the government must give them a listening ear to resolve this issue amicably.

“I do not think any of them want to walk out of the country, apart from the evil one that is the so-called IPOB leader, Nnamdi Kanu. We should not be surprised if he behaves funny; we know that certain forces are working with him to destabilize the country; he is an agent of destabilization. I will not want to encourage anyone to give him a listening ear.

“But the rest, to an extent, are genuine and the government should listen to them, ask why they are agitating. There is probably certain perceived injustice on their side, so they chose to agitate to draw the government’s attention.

“And to those who are just being evil-minded like an IPOB leader, the government should do the need and ensure that he is brought back to the country to face the music.”

The AYCF National President also commented on the possibility of secession with bloodshed.

He said: “I don’t want to imagine that we will get to that, but certainly, it will not sound well for the country. I do not think they also want to go that far but that somebody is making noise does not mean that is what will happen.

“I, however, worry because some of them go out of their way to instigate violence, and I don’t like it. In recent times, a lot of things have happened in the agitation for Oduduwa Republic that some of us do not find funny.

“Somebody assumes to himself and starts dealing with people, even going as far as to maim and kill people from Northern extraction, all in the name of agitation. Some of us were watching not because we are cowards but we chose the peace part so that men of honour and those committed to project Nigeria, the government can intervene in the matter.”