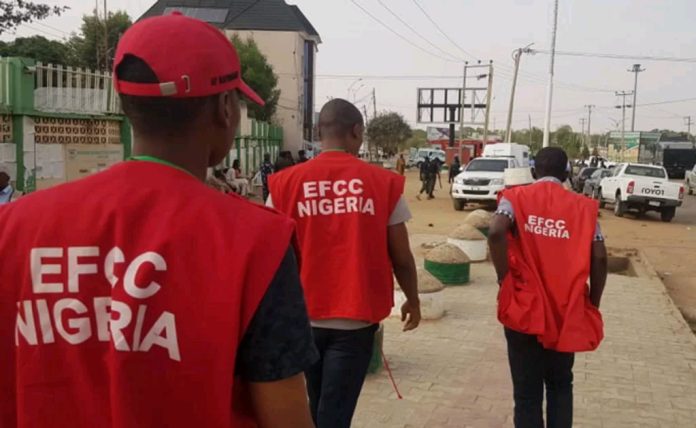 Abdulkarim Chukkol, the Director of Operations of the Economic and Financial Crimes Commission (EFCC), has made a new revelation.

He said the agency has discovered that many of the over 6,000 Bureau De Change in the country were unregistered.

He said EFCC operatives raided some BDC offices in Abuja and Lagos to sanitise the foreign exchange sector.

He also said the commission acted on intelligence on some operators of BDC.

Chukkol, who spoke on Good Morning Nigeria, a breakfast programme on the Network Service of the Nigerian Television Authority (NTA), said the arrest of BDC operators and currency speculators in the parallel market was not indiscriminate but a product of intelligence.

He  represented the Executive Chairman of EFCC, Abdulrasheed Bawa, to discuss on ”Sanitising Ungoverned Operators in the Forex Sector”.

A statement by the Head of Media and Publicity of EFCC, Mr. Wilson Uwujaren, quoted the director as saying: “Many of the over 6,000 registered BDC do not belong to the Association of Bureau De Change Operators of Nigeria and therefore out of the orbit of regulators.

“The CBN guidelines are clear regarding returns by BDCs, but how many of them do this?”

He said the commission “considers foreign exchange malpractice as an economic crime against the Nigerian state, He said: “The commission as far back as 2016 established a full-fledge Section known as Foreign Exchange Malpractices Section and for over 10 years maintained visible “presence at all airports in the country to checkmate incidences of bulk cash movement outside Nigeria which is another aspect of this menace.”

“Through the Commission’s presence at the major gateway into the country, many arrests of cash smugglers have been made and humungous sums in foreign currencies recovered.

“Some were arrested with excess of $6million(USD), others with $2million(USD) and we know that these huge sums were not meant to be used in buying goods but stolen monies being laundered out of the country.”

“The EFCC not only recovered some of these monies, but secured their forfeiture to the Federal Government. The culprits were prosecuted.”

In a separate statement, the EFCC yesterday confirmed the arrest of an alleged currency speculator.

The statement said: “As part of its ongoing operation to sanitize the foreign exchange sector and rid it of speculators and all shades of economic saboteurs, the Economic and Financial Crimes Commission (EFCC) has arrested one Mustapha Muhammed alias Mustapaha Naira.

“He was picked up by operatives of the Commission on Saturday at Wuse Zone 4, the hub of parallel market operations in the Federal Capital Territory.

“The suspect has made useful statement while the investigation continues.”