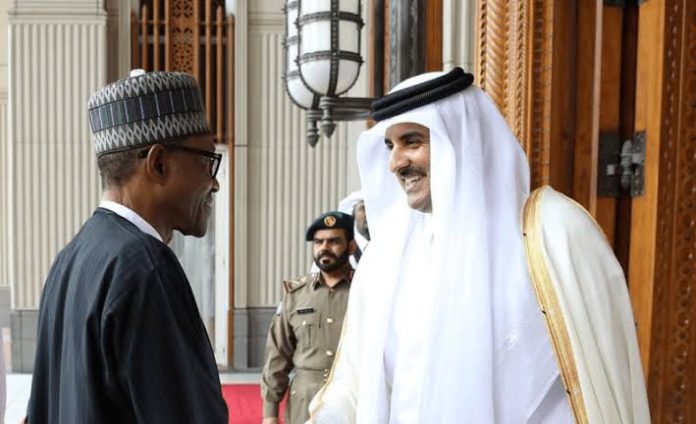 Tamim bin Hamad Al Thani, the Emir of the State of Qatar has rejected a visit to the country by Nigerian President, Muhammadu Buhari.

The Emir is the monarch and head of state of the country. He is also the commander-in-chief of the Armed Forces and guarantor of the constitution.

Al Thani holds the most powerful position in the country and has a prominent role in foreign relations.

The Nigerian government had proposed September 11 and 12, 2022 for Buhari to visit the country but the Emir in a note verbale exclusively obtained by SaharaReporters said the dates are not suitable for him and asked for other dates in 2023.

“The Embassy of the State of Qatar in Abuja presents its compliments to the Ministry of Foreign Affairs of the Federal Republic of Nigeria (Regions Department) and with reference to the latte’s Note M 403/2022 dated 12/08/2022 informing that H.E Muhammadu Buhari, President of the Federal Republic of Nigeria has accepted to visit Qatar on 11-12 September 2022 on the invitation of H.H Sheikh Tamim Bin Hamad Al-Thani, Emir of the State of Qatar,” a note verbale sent from the Qatar embassy on August 19, reads.

“The Embassy of the State of Qatar avails itself of this opportunity to renew to the Ministry of Foreign Affairs of the Federal Republic of Nigeria (Regions Department) the assurance of its highest consideration.”

However, a presidential source blamed the State Chief of Protocol (SCOP), Amb. Lawal Kazaure and his team for the rejection.

“Actually, it was the Emir that invited President Buhari to come and visit him. Unfortunately, his team didn’t follow the usual diplomatic channel to accept and propose alternative dates.

“After over 3months without a word, the State House wrote directly to Qatar Embassy in Abuja to inform that President Buhari wants to visit from 11-12 September 2022. The Ministry of Foreign Affairs was not involved. Our Embassy in Doha, the capital of Qatar was not also consulted.

“Unfortunately, the President was snubbed and asked to come next year. They know there will be a newly elected president by that time. It’s a way of telling him, he’s not welcome again. The initial plan was to proceed to New York for UNGA (United Nations General Assembly) from Doha.”

Buhari has embarked on over 12 international trips in 2022 and spent at least 44 days outside Nigeria.

On February 15, 2022, the Nigerian leader embarked on a trip to the Belgian capital, Brussels, where he participated in the 6th Europe-Africa Summit.

About a week before Belgium, Buhari joined his African counterparts in Addis Ababa, Ethiopia for the 35th Ordinary Session of the Assembly of the Heads and Government of the African Union.

In March, the President visited Nairobi, the Kenyan capital, where he participated in the 50th anniversary of the UN Environmental Programme before returning to Abuja, and later jetted out to London, the United Kingdom, for a medical trip that lasted for about two weeks.

On May 9, Buhari embarked on another trip to Abidjan, Côte d’Ivoire, to attend a United Nations conference on the future of land regarding desertification, drought, degradation, rights, restoration and implications for national and world economies.

Ten days later, he was in Abu Dhabi, the United Arab Emirates, on a condolence visit to its new President, Sheikh Mohamed Al Nahyan, on the passing of the former president and ruler of Abu Dhabi, Sheikh Khalifa Al Nahyan.

On May 27, the President departed Abuja for Malabo, Equatorial Guinea, to participate in the African Union Extra-ordinary Session of the Assembly of Heads of State and Government with a special focus on security.

On June 4, he visited Accra, Ghana, to attend an extraordinary summit of the ECOWAS Authority of Heads of State and Government on the political situation in Mali and other parts of the sub-region.

On June 22, President Buhari also departed Abuja for Kigali, Rwanda, to attend the 26th Commonwealth Heads of Government Meeting, which was held from June 20 to 26, 2022.

In July, he departed Abuja for Dakar, the Senegalese capital to participate in the International Development Association for Africa Summit.

The trip came barely 24 hours after terrorists attacked his convoy in Katsina, the President’s home state and the Kuje prison facility in Abuja, the nation’s capital.

Also, two police officers were killed in the state where the attack on the president’s convoy took place.

Another senior police officer was also killed in a separate state.

Meanwhile, President Buhari’s aide on new media, Bashir Ahmad has faulted the report on the rejection of the president’s proposed visit.

According to him, “This headline is entirely incorrect. Qatar didn’t reject the President’s visit. In fact, like you clearly stated it in your story, it’s Qatar that invited Nigeria and those familiar with diplomacy know how this thing works, the dates ALWAYS have to be suitable for both parties.”