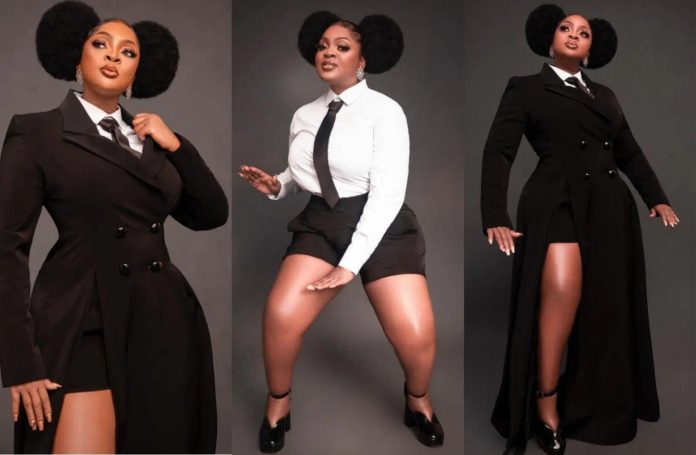 Nollywood actress Eniola Badmus has set the internet on fire with her jaw-dropping photos.

The actress who is set to mark her first birthday with her transformation body has been counting down to her big day.

The actress is pressing necks on Instagram with several stunning photos of her transformation body.

“We counting down already +1 in few days”.

Frank Talk Now  recalls Eniola Badmus had shared a beautiful video of herself online as she prepared to celebrate her first birthday with her banging transformation body.

Eniola Badmus, otherwise known as Bursty or Gbogbo Big Girls in Funke Akindele’s Omo Ghetto series and Jenifa’s series, danced heartily as she counted down to her birthday on the 7th of September 2022.

Anticipating her big day, Eniola Badmus wished her fans a happy new month while vibing to one of her buddy, Davido’s latest songs.

She wrote: Happy new month, guys……..Allow me to do this just because it’s my birth month………… I rep #7th September baby.

Eniola Badmus’ sudden transformation had shocked many even when they all tried to cover it up with lovely commendations. Her body transformation was one of the biggest topics on the internet because she took social media by storm with the shocking change.

Eniola Badmus shared a photo of her old body compared to her new body. The photo got many talking on her timeline as they tried to match how her shocking decision wowed them.

She disclosed that her epic transformation was not an easy journey as many portrayed it to be, stating her eyes had seen.