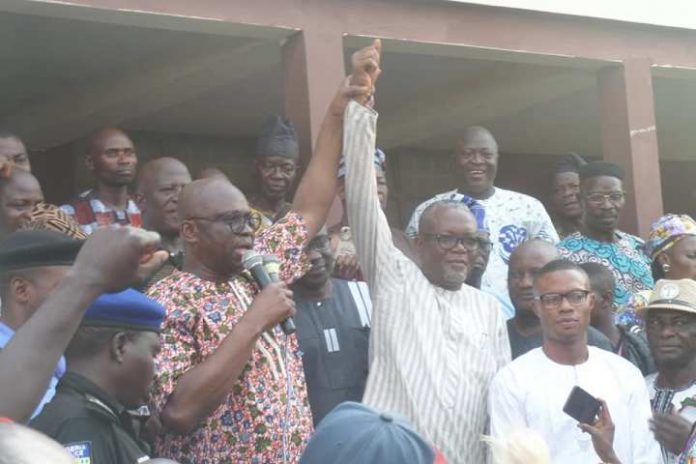 Former Governor of Ekiti, Mr Ayodele Fayose, on Tuesday, unveiled the Chairman of Peoples Democratic Party (PDP) in the state, Mr Bisi Kolawole, as his preferred choice for the 2022 governorship election in the state.

Kolawole, a former House of Assembly member, representing the Efon constituency, was formally presented by Fayose to his supporters in all the 177 wards in the state.

The occasion was attended by some party chieftains, including a former member of the House of Representatives from Ogun, Mr Ladi Adebutu, a former PDP South-West Zonal Chairman, Dr Eddy Olafeso, PDP Chairman in Ogun, Alhaji Sikirukahi Ogundele and Mr Kayode Alufa, among others.

Speaking at the occasion, Fayose described Kolawole as a bridge-builder, who would usher in a better future for Ekiti and the party.

He commended two former House of Representatives members, Messrs Ayodeji Oladimeji and Segun Adekola for stepping down for Kolawole to allow peace to reign, saying “this is a mark of respect for my leadership.

“The man you have come to honour, Bisi Kolawole, is our collective project. I made him my preferred candidate in the overall interest of our party, but this does not foreclose due process of nomination in PDP.

Fayose, however, said that whoever won the primary among the aspirants would have his support.

“PDP is what we are supporting; it is what we are marketing, and all we want is a winner; we have started consultations and I know that victory is sure for us,” he said.

In his address, Adebutu appealed to Fayose to mend fences with his aggrieved supporters to keep and strengthen his political base.

Kolawole, in his remarks, promised that he would not betray the confidence reposed in him.