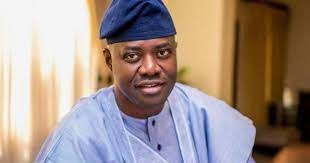 Hours after the Federal Government directed the reopening of schools to allow the resumption of final year primary and secondary school classes, the Oyo State chapter of the Peoples Democratic Party (PDP) has lauded the state governor, Engr. Seyi Makinde, for maintaining the pacesetting profile of the state.

The PDP, in a statement signed by its Publicity Secretary, Engr. Akeem Olatunji, stated that the decision of the Presidential Task Force on COVID-19 to allow the resumption of certain classes was a complete adoption of the proposals earlier announced by the government of Oyo State, two weeks ago.

Olatunji, who stated that this was not the first time the Federal Government would be adopting the Oyo State template in the fight against COVID-19, pointed out that  President Muhammadu Buhari announced partial lockdown, adopting the dusk to dawn curfew approach put in place by Governor Seyi Makinde at the inception of the COVID-19 challenge in the state.

He also lauded the Federal Government for retaining the curfew in line with the Oyo State government example.

READ ALSO: EXCLUSIVE: See what Nigerian schools are doing ahead of school reopening

The statement read: “We in the Oyo State PDP commend Governor Seyi Makinde for living up to expectation in setting the pace for others and even the Federal Government. We also commend the Federal Government for the initiative it took to announce that schools will be reopened to students in graduating classes.

“We see the initiative as bold because it was an adoption of a policy already put in place by the Oyo State government and the Federal Government did not consider political correctness in following a policy that has proved to be well-thought-out.

It will be recalled that the Oyo State Task Force announced two weeks ago that teachers should resume to schools on June 29 to put in place hand wash points and other protocols ahead of the resumption of students in terminal classes a week after.

The government had also gone ahead to raise a special task force to monitor the preparedness of the schools, issuing several guidelines on wearing face masks and sitting arrangement for the students in line with the COVID-19 protocols.