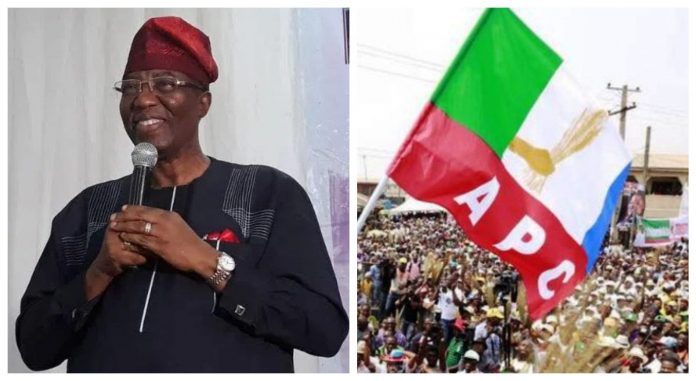 A former governor of Ogun State, Otunba Gbenga Daniel has revealed why he joined the ruling All Progressive Congress (APC). Speaking to State House correspondents on Monday, March 22, Daniel said there are not too many options for him as a politician.

The former governor spoke to the reporters shortly after he was hosted by President Muhammadu Buhari alongside a former Speaker of the House of Representatives, Dimeji Bankole.

Bankole and Daniel, both from Ogun state, recently defected to the APC after spending time as members of the African Democratic Congress and the Peoples Democratic Party respectively.

The Cable quoted him as saying:

“There are not too many options at the party. One thing is sure that we are going through health and economic challenges, we must do less of political contestations and give support.

“One thing that is for sure, is that the entire world is going through challenges that are global challenges, economic challenges, health challenges. And when you are in a situation like this, as I usually opined, we should do less of partisan contestation, all of us must come together to support whoever is in power.

“And what we have decided to do is to come and give our support to the president so that jointly, we can continuously navigate the country, that is what is relevant.”

The visit comes on the same day the APC appointed both Daniel and Bankole as members of its recently created contact/strategy committee.

The duo will serve in the committee with 59 other chieftains of the party which includes another former Speaker and recent decamped, Yakubu Dogara.

Meanwhile, there are indications that dissatisfaction is growing within the APC over an alleged plot by some party chieftains to further extend the tenure of the Governor Mai Mala Buni-led caretaker committee.

Some interest groups are said to be warming up for a showdown should the Buni-led committee renege on its mandate to conduct a national convention in June 2021.

Already, there are allegations that the Buni-led committee plans to stay in office after June 2021.

Some chieftains of the party are already decrying the lack of preparation for a national convention on the part of the Buni committee.

Franktalknow.com had earlier reported that some chieftains of the APC had planned to scuttle the just-concluded membership registration and validation exercise in all state chapters with lawsuits.