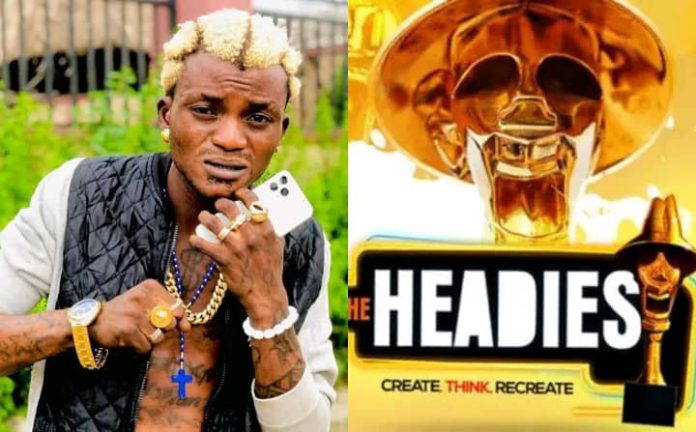 Zazu crooner and rave of the moment, Habeeb Okikiola aka Portable has received a threat from the organisers of the 2022 Headies Award for threatening to kill his co-nominees.

The controversial singer in a viral video threatened to kill whoever beats him to the award category.

Zazoo crooner, Portable was nominated on Tuesday, May 14, in two categories; the ‘Rookie of the Year’ and ‘Best Street-Hop Artiste.’

Other nominees e in the ‘Rookie of the Year’ category include Av, Fave, Magixx, and Ugocci.

In the second category, he is up against  Bella Shmurda, Mohbad, Naira Marley, and Goya Menor among others.

Upon droppingbthe nomination list, Dr Zeh or  Zazoo’ crooner as fondly called took to his Instagram page to make a threat to whoever wins the 2022 Headies Award over him.

READ ALSO: I Worked For This – Portable Reacts As He Gets Two Nominations For 2022 Headies Award However, the award organizers couldnt but react to the threat by releasing a statement on Friday, 27 May, 2022, saying that ” It might be forced to disqualify the singer if he fails to retract his statement and issue an apology on his Instagram page.”

Meanwhile, the organizers had to officially report the threat  note to the Police in furtherance of protecting all nominees.

“Should Mr. Okikiola fail to meet our demands, we will not only disqualify him from participating in The Headies but also enforce the instrumentality of the law.

“The general public are hereby implored to disregard the video and stop the dissemination of the same in the public space.” The Headies noted.

Burna Boy: Various times artiste has been involved in acts of violence