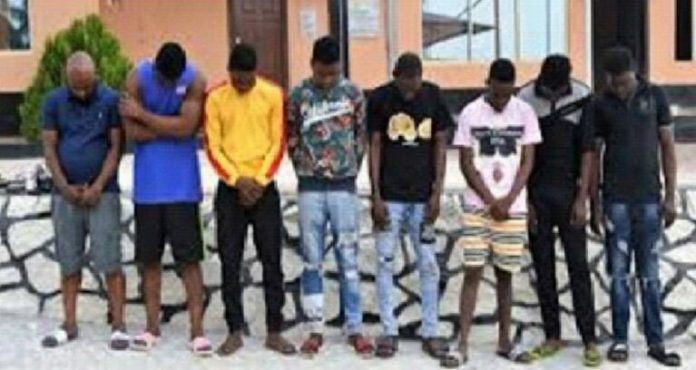 EIGHT suspected internet fraudsters have been arrested at their hotel hideout in Akure, Ondo State by operatives of the Economic and Financial Crimes Commission, EFCC.
They include Olasukanmi Daramola, Oluwaseyi Akinluyi, Abiola Mutiu, Adebanjo Adegoke, Keyinde Idowu, Sunday Morufu, Adebayo Odewunmi and Ridwan Tobiloba.
It was reported that the suspect stayed in the popular hotel for over two months before they were picked up by the anti-graft agency acting on a tip-off.
Some landlords in one of the Housing Estates where the hotel is situated, who were not comfortable with the lifestyle of the suspects, reported them to the agency.
It was gathered that the operatives of the agency, who arrived in the state capital three days before their arrest, visited the hotel like other customers in a bid to study the movement of the suspects.
They reportedly swooped on them at about 6 pm last Sunday when the suspects were asleep.
Attempts by some of the suspects to escape were thwarted as all the entrances to the hotel were cordoned off by the operatives.

A source who disclosed this to newsmen said that the operatives acted on intelligent reports linking the suspects to some fraudulent activities ranging from scams on numerous dating sites and obtaining money by pretence amongst others.
The source, who pleaded anonymity said: “Three exotic cars, mobile phones and laptops alongside several incriminating documents were recovered from the suspects during the search of their hotel rooms.”
One of the operatives who spoke in confidence said that the suspects have been whisked to its zonal office in Oyo State for further interrogation.
The operative said: “The suspects would be charged to court as soon as investigations are concluded.”
The state Police Command claimed ignorance of the arrest of the suspects in the state capital.