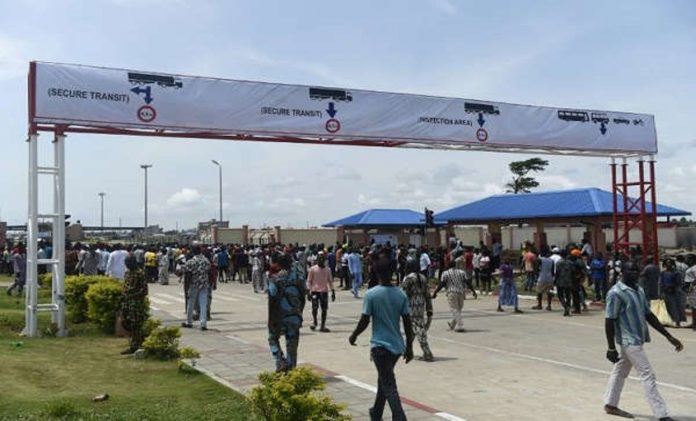 Despite its forceful reopening by some Yoruba nation agitators on Saturday, the popular Idiroko border has remained closed.

There was pandemonium in Idiroko, Ipokia Local Government Area of Ogun State last weekend when some youths, who claimed to be heroes of Oduduwa Republic stormed the border, which was closed by the Federal Government in 2019, and dismantled the barricades.

According to Daily Post, the invaders also snatched a gun from an immigration officer on duty, daring soldiers and other security agents to come out and engage them in a gun duel.

It was reported that the said border has since been shut by security agents immediately after the agitators left.

As of the time of filing this report, security agents have returned to their duty posts to prevent the influx of contrabands and illegal migrants through the border.

“Immediately the Yoruba nation agitators left on Saturday, the border was closed again. Nobody can move in any illegal goods. The border is not what can be opened like that,” a resident of the border community said.

Also, a trader, who identified herself simply as Tutu, said the efforts of the agitators yielded no result, saying “nothing has changed at Idiroko border.”

In an interview with newsmen, the Spokesman of the Nigeria Customs Service (NCS), Ogun 1 Area Command, Hammed Oloyede, said men of the service are at their various duty posts as of Thursday.

Oloyede corrected the erroneous belief that the Idiroko border had been reopened by the Federal Government in December 2020, saying it was only immigration activities that have been going on, not the importation of goods.

“One thing people need to understand is this, initially when the Federal Government gave directives for the reopening of borders, it started with four borders and it has remained like that ever since then. It is only immigration operations that have been effective,” Oloyede clarified.

The command maintained that it is working with other security agencies to keep hoodlums away from the nation’s frontier with Benin Republic.

“We heard of the incident and we have been able to fortify security around that place. We are working with men of the customs service and immigration to make sure those hoodlums are kept away from that axis,” Oyeyemi stated.

He added that security agents are working hard to retrieve the gun that was snatched from the immigration officer on Saturday.