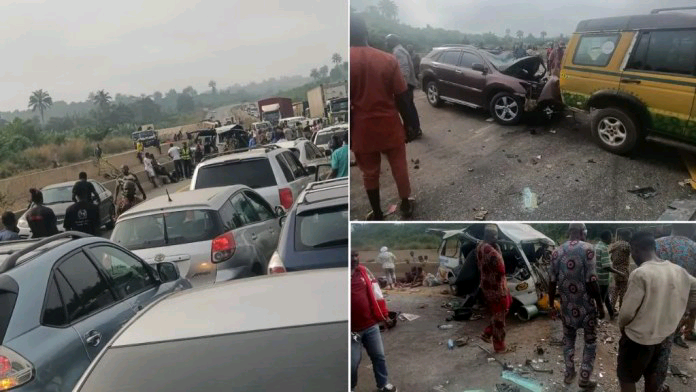 No fewer than 15 people have been badly injured in an early morning motor accident on the Lagos-Ibadan Expressway.

The incident which occurred on Thursday, November 24, 2022, was said to have resulted in an interminable traffic gridlock on a section of the Lagos-Ibadan Expressway.

The cause of the accident is yet to be ascertained as of press time, but it was gathered that some trucks have blocked the road making it difficult for commuters to ply.

In a video sighted by our correspondent, the injured people why seen lying helplessly on the floor. However, onlookers were trying to get them to the nearest hospital.

It is yet to be confirmed if the Federal Road Safety Corps in the axis have been alerted on the incident as of the time of filing this report.

The accident involved a Toyota Sienna bus marked, DKP60LG. The Sienna bus was said to have engaged in speeding, which Okpe said led to loss of control, saying it was eventually “brushed” by a tanker.

Similarly, on October 20, 2022, no fewer than 10 persons died after a tanker carrying petrol exploded at Araromi town along the Lagos-Ibadan expressway, Ogun state. Five vehicles were also destroyed by the fire in the incident.

Watch the video of the incident below: