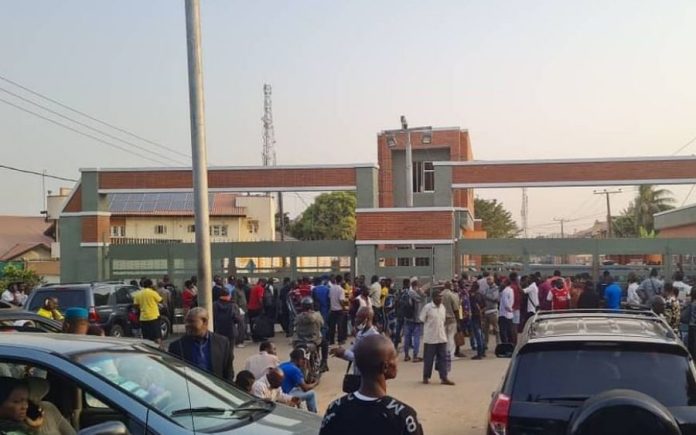 Hundreds of Magodo residents were stranded on Wednesday as they were locked out of their estate by policemen who escorted landowners to enforce a Supreme Court’s judgment after 38 years of dispute.

Stern-looking policemen took over the area in Mogodo to execute a Supreme Court judgment which had mandated the Lagos State Government to give back 549 plots of land it had fraudulently acquired over 38 years to them.

The Chairman of Shangisha Landlord Association, Alhaji Adebayo Onayiga, who is the creditor in the Magodo Estate Debacle has now provided insight into the 38 years journey of the legal battle to reclaim the land thus:

Sometime between 1984 through 1986, the government of Lagos State of Nigeria forcefully took the parcels of land belonging to us, members of the landlord Association of Shangisha /Magodo occupied by us, under disguise with claims that will be used for the construction of an international standard hospital.  We the landlords were forcefully evicted from the land in dispute.
The government went ahead to pull down all our houses and took the entire area which was not what they had asked for in the first place.  After pulling down our houses, we were embarrassed to find out that the Lagos state government involved had converted the land for their personal interest, allotting the said land in plots to their friends and cronies, and some of the high and mighty people in the society including some judges in the Lagos judiciary and members of the former state executives.
The Association (Judgment Creditors) unanimously elected Chief Adebayo Adeyiga as their chairman and six other members to represent the association in the recovery of their land from the Lagos State government.  We approached the Lagos State government, armed with facts of the fraudulent allotment, and it was resolved between us that members of the Association would be given plots of land from the then-new scheme known as Magodo scheme 2.
It was when they failed to do so, that we were forced to sue the Lagos State government through the executive officers sometimes in June 1988 in suits ID/795/88 Chief  Adebayo Adeyiga and six (6) others versus military governor of Lagos State and four(4) others in Lagos State high court, Ikeja.
The association’s application for an order to sue and prosecute the case in a representative capacity was brought before Honorable Justice W. A. Oshodi, and it was granted on 21st of November 21, 1988.
While the case was going on, the Lagos State government refused or neglected to obey the court order to maintain the status quo, rather they and their cronies intensified construction activities.  This forced us to apply for an interlocutory injunction which was granted by the late Justice A. L. Balogun on October 19, 1992.
By this ruling of the courts, it was expected that the Lagos State government and the Association would respect the court of the land and refrain from allotting or further development on the land, pending the determination of the substantive suit, but they refused.
On May 17, 1993, while the case was still pending in court, the then civilian governor of Lagos State, the late Sir Michael Otedola gave the executive order for the release of our land to us, which was not also complied with by the state government officials.

On the day of ruling our counsel, Chief Wole Olanipekun SAN raised an objection on non-service of the motion on the Association and he asked the court to stay the ruling, but the proceedings judge Honorable Justice Raliatu Adebiyi went ahead to deliver her ruling.
The Association forwarded another petition to the NJC against Justice Raliatu Adebiyi for setting aside the writ of possession which was signed by the retired Honorable justice Olufunmilayo Atilade on the directive of the NJC and which had been assigned by the Sheriff for execution.  In our petition to NJC, we appealed for its intervention on the matter and inform the council of an attempt to deny our members from harvesting the fruit of our judgment.
CONCLUSION.
From the following narrative of our tortuous journey for over 37 years on our properties, Nigerians can now see how the people who are supposed to keep our properties in trust for us have misused and looted.  Nigerians can also see how the people who are supposed to keep our laws in a working state have turned the world upside down.  The Supreme court is the final court of the land and when it speaks no other authority can speak against it, it is a crime and criminal to do so.
As we once said, we need people like the Attorney General of the Federation of Nigeria Abubakar Malami who is indeed alive with his responsibility.  We also thank the President of Nigeria Muhammadu Buhari for putting a round peg in a round hole in the person of Alhaji Abubakar Malami (SAN).
Finally, an adage says the will of justice grinds slowly, and it is not easy to catch up with when the pendulum falls. Mr. Adesegun Ogunlewe and Mr. Gbenga Bariu Ashafa pustule and boast that the landlords will reap the fruits of their judgment in their graves.  We can now see that Ogunlewe and Ashafa are not God. It is only their wishful thinking. God is more powerful than human beings.