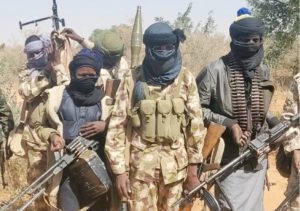 Zamfara kidnap kingpin Gudda Turji has reportedly issued a notice to villagers in some northern states not to comply with the state governments’ directive that all markets be closed.

Some state governments in the north including Kaduna, Katsina, Niger and Zamfara had ordered that markets and some roads be closed following incessant banditry attacks.

However, Turji, it was gathered, has vowed to deal with villagers who comply with the governments’ directive.

A counter-terrorism expert and Senior Analyst with the Tony Blair Institute, Mr Bulama Bukarti, shared the notice via Twitter.

He wrote, “Remember the kidnap kingpin, Gudda Turji, who went on the rampage a couple of months ago when his father was arrested until he was freed?

“He has issued a threat to villages that anyone who complies with the policy of closing markets and banning the sale of petrol will pay a heavy price.

“It should be clear from experience that residents cannot obey state governments until and unless they feel protected. They know that the terrorists can raid at any time and so will be more likely to follow the terrorists’ demand because they are the de factor government of the area.

“If governors want their banning orders to be effective, they must get (President Muhammadu) Buhari to deploy enough security to protect innocent residents. Otherwise, nobody will disobey terrorists that he knows will kill him without any help.”

Turji had in July led a string of horrific attacks on more than six villages in Zamfara State, razing them, killing many people and abducting over 150 others.

The kidnap kingpin reportedly unleashed the terror as a retaliation for the arrest of his father days before, which he blamed on intelligence from the villagers. 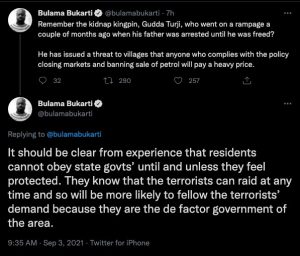