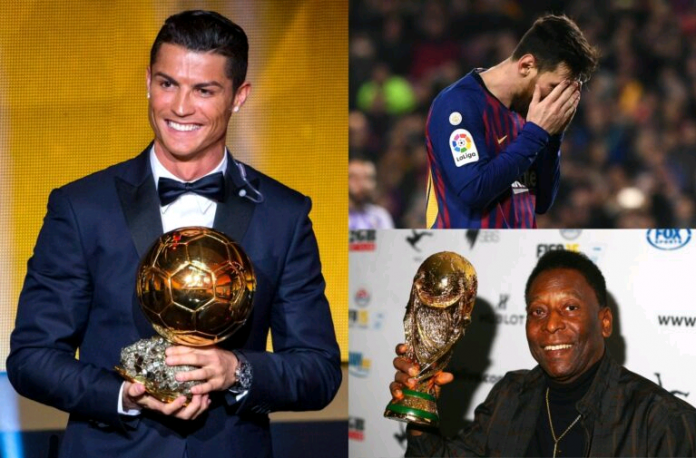 Top mathematician, Dr Tom Crawford of Oxford University has come up with a formula to determine once and for all the greatest men’s footballer of all time.

Commissioned by LiveScore, one of the world’s leading real-time sports updates providers, Dr Crawford analysed dozens of history’s most iconic footballers to determine the GOAT.

The in-depth analysis looked at ten of the best players of all time who have won a minimum of two Ballon d’Or awards in their career.

According to Oxford’s finest, ‘Z factor’ seasons signify a campaign where the impact of a player significantly out-performed any other from the previous five seasons.

Having factored in all of those criteria, Dr Crawford was able to determine that new Manchester United signing Cristiano Ronaldo is the undisputed GOAT – eclipsing Lionel Messi.

Ronaldo scored an incredible 100 per cent on the GOAT index, putting him 6 per cent clear of Messi, who swapped Barcelona for Paris Saint-Germain earlier this summer.

Both players have produced incredible statistics throughout their careers, with the Argentine scoring 711 goals in 884 appearances and the Portuguese finding the back of the net 748 times in 1026 games.

Remarkably, there is no room in the top eight for Argentina hero Diego Maradona.

He is ninth in the GOAT list, behind Marco van Basten, Alfredo Di Stefano and Michael Platini.

There is no doubt that Maradona was one of the greatest to play the game, but the algorithm took into consideration the sporadic nature of his brilliance across a relatively small number of seasons.

Ric Leask, Marketing Director at LiveScore, said: “As football fans we have all grown up mesmerised by the most iconic players of our respective generations.

READ ALSO: Drama As Model Marries Self After Giving Up On Men (Photo)

“However, when it comes to debating the Greatest of all Time, crowning the G.O.A.T. has been a difficult challenge.

“For the first time, we wanted to apply the science of maths to help us solve the eternal question, and it has been fascinating to watch Professor Tom Crawford pour over the numbers on behalf of millions of global fans.

“The G.O.A.T. Index is about far more than a score, for us it helps to settle a debate that has run for generations.

“In May, we backed our man as we unveiled Cristiano Ronaldo as our Official Global Brand Ambassador, and now we know for sure that we have the maths on our side.”

Dr Tom Crawford, Mathematician at the University of Oxford, added: As a massive football fan, I have long debated with my friends who the greatest player of all time is.

“I have loved bringing maths to the masses over the past few years, so being able to showcase how you can use it within the world of football has been a lot of fun.

“Whilst Cristiano Ronaldo has come out on top from my algorithm, it is clear that all the other players’ stats are absolutely incredible, and I am sure the debate will continue!” 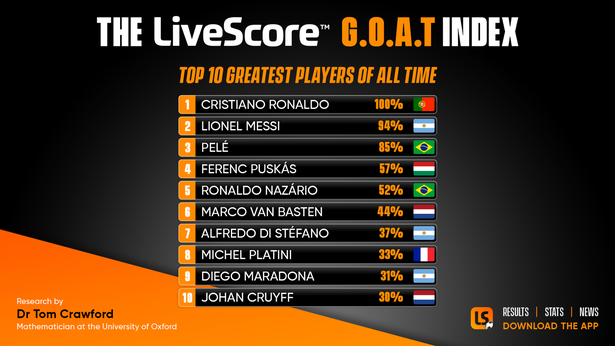 Pastor who raped congregants as ‘blessing’ gets 37 years behind bars