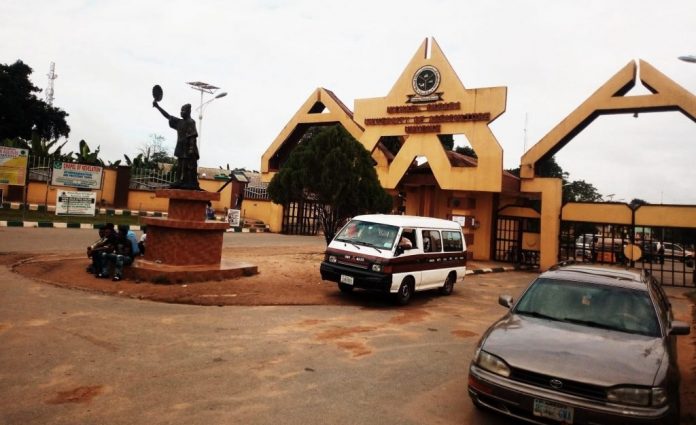 The students of Michael Okpara University of Agriculture Umudike (MOUAU), on Tuesday, shut down all activities in the institution to protest the alleged hostile education system in the school.

Some students carrying placards displayed their displeasure with the Institution’s management.

The placards read, ‘No light On Campus, No security, No water on the Campus, No Hall for examination, High Acceptance fee’, among others.

The students who blocked the ever-busy Ikot-Ekpene road where the school is situated, rendered other road users stranded, as the road is currently experiencing a heavy traffic gridlock.

Some students who spoke with newsmen on conditions of anonymity expressed their worry over what they described as the hostile education environment in the Michael Okpara University of Agriculture.

Recall that there have been calls from Nigerians and Abians to expedite action to upgrade the University into a Conventional University where the students can have the opportunity to study courses of their choice and as well, have a conducive environment for learning and living.

Efforts to reach the School’s Public Relations Officer, proved abortive as she would not pick her calls.

A lecturer who also pleaded anonymity appealed to the students to calm down and exercise patience with the new Vice-Chancellor, who is barely two months old in the school.

He claimed the new VC was doing his best to alleviate the sufferings of students, as well as put the school on the pedestal of development.