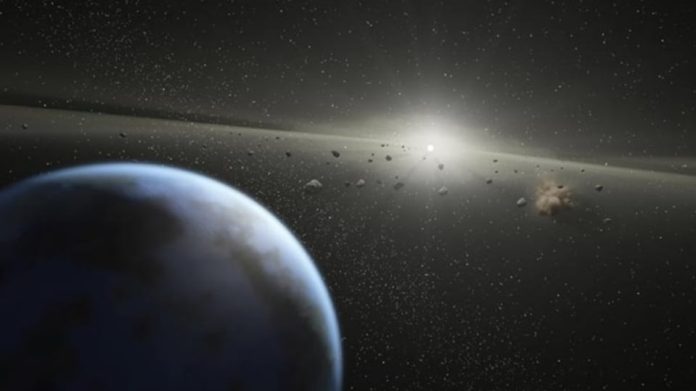 The three-mile-wide moon, which is yet to be officially named, orbits the 17-mile-wide asteroid Polymele from a distance of 125 miles.

Astronomers managed to observe the new discovery by chance, using telescopes on the ground, when it passed in front of a star and blocked out its light.

At the time of the observation, the pair was 480 million miles (770 million km) from Earth – so the new find is roughly equivalent to seeing a quarter on a sidewalk in Los Angeles from a skyscraper in Manhattan, NASA says.

Polymele is one of the Trojans, a large group of asteroids referred to as the ‘fossils’ of the solar system that share Jupiter’s orbit around the sun

It’s also one of the asteroids that will be visited in 2027 by Lucy, NASA’s space probe that launched in October last year.

Lucy is currently circling Earth but it’s set to visit Polymele and its moon in 2027.

NASA said the natural satellite was discovered on March 27 when it passed in front of a star and blocked its light – known as an ‘occultation’.

But the discovery was ‘a surprise’ because researchers at the time had been focused on getting data about Polymele.

Polymele was expected to pass in front of a star, allowing the team to observe the star blink out as the asteroid briefly blocked, or occulted it.

By spreading 26 teams of astronomers across the path where the occultation would be visible, the Lucy team planned to measure the location, size and shape of Polymele while it was outlined by the star behind it.

‘We were thrilled that 14 teams reported observing the star blink out as it passed behind the asteroid,’ said Marc Buie, Lucy’s occultation science lead at the Southwest Research Institute in San Antonio.