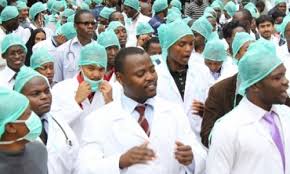 The National Association of Resident Doctors (NARD) has insisted that its ongoing industrial action would not be suspended.

Frank Talk Now reports that the National Industrial Court had on Monday ordered doctors to suspends its ongoing strike following a suit filed against them by the Minister of Labour and Employment, Dr Chris Ngige.

But the association’s National President, Uyilawa Okhuaihesuyi, told PUNCH that they are yet to be served the court ruling.

He maintained that members of the NARD would not suspend the ongoing strike.

“We have not received any order; we only saw the news on social media. We will not be resuming work,” he said.

Doctors on August 2, embarked on strike action, accusing the federal government of failing to implement agreements it had with their union on issues including salaries, hazard allowances, and others.

The strike embarked upon by the doctors had been expected to be close to a peaceful resolution until the resident doctors on Sunday told the federal government they won’t sign the memorandum of understanding put on the table by the government team.

The doctors accused the government of insincerity in its dealings, hence their inability to trust what is contained in the memorandum again since they’ve been deceived previously.

They also want the government to pay the striking members of the union first as a show of faith after it had earlier threatened a ‘no work, no pay’ rule.

On Monday, Justice John Targema, a vacation Judge at the National Industrial Court of Nigeria (NICN), asked all parties in the suit to suspend all forms of hostilities and maintain status quo.

He stated that this should be done pending the hearing and determination of the motion on notice.

The judge adjourned the case to September 15 for a hearing of the motion on notice and/or any other pending application.