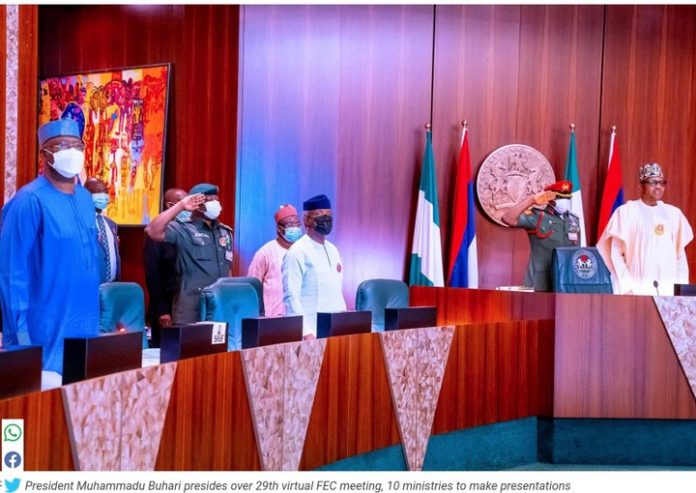 Minister of Power, Sale Mamman, made this known to State House correspondents at the end of the Council meeting in Abuja.

He said the $1.62million of the amount ($26m) was the payment of the claims and the variation of onshore and offshore cost of the existing contract for the construction of 1×1 50 MBA three 31, 32, 33 KV sub-stations at Damaturu and 1×330 KV land by extension at Gombi, Adamawa.

He revealed that an additional N102.9million was approved for the affected project.

The minister also disclosed that the remaining $24.38million of the total approval was meant for the design, manufacturing and supply of four fabricated sub-stations of 2×100 MBA 132 33 KV power transformers with complete accessories for deployment to Damaturu, Potiskum, Biu, and Maiduguri.

He said: “Today, the Federal Executive Council has graciously approved two memos from the Federal Ministry of Power.

“The other one is the approval of the contract for the design, manufacturing and supply of four fabricated sub-stations of 2×100 MBA 132 33 KV power transformers with complete accessories for deployment to Damaturu, Potiskum, Biu, and Maiduguri for the Transmission Company of Nigeria (TCN) in favour of Msssr Kidon T Good Electric Company Limited and Incomtel Engineering Limited in the sum of $24,387,850.22 cents plus N1,475,204,584.34.

The Minister of Finance, Budget and National Planning, Dr Zainab Ahmed, also told the correspondents that the Federal Government had budgeted N396 billion for the provision of COVID-19 vaccine in the 2022 Appropriation.

“The submission that was made to Mr. President at that time was in the sum of N399 billion, but included in this N399 billion was a N103 billion for building of primary healthcare centres.

“So we have worked with that and met several times with the ministry, we have agreed to back out from this building of primary health care centres, that can wait till later.

The minister explained that the delay in the submission of the supplementary budget on COVID-19 was because the government wanted to confirm the vaccines donation that Nigeria was expecting from donors.

“There have been some delays because we expected the ministry to confirm the vaccines donation that Nigeria is expecting. We are expecting a total of not less than 43 million doses of vaccines.

“So they are supposed to find out when those ones will come. Because, if we are going to get back the donated vaccines, and at the speed of the current rollout, we have to slow down on what we are buying ourselves.

“So the ministry is working with partners that are donating these vaccines.

READ ALSO: It’s #AprilFoolsDay and these are the costly mistakes everyone should avoid

“We see the timelines of the donations and see the gap that the government needs to fill in 2021, but we have already provided to the ministry funds to enable them roll out the four million vaccines that have been brought already into the country, and the vaccination process is ongoing.

“So for us, it is still work in progress. We hope in the next couple of days, we will have clarity on the schedule of vaccines expected from donors, and then we will now be able to firm up what government has to provide for in 2021. And therefore the 2021 component we will provide it during the 2022 appropriations.”

It would be recalled that President Muhammadu Buhari and the leadership of the National Assembly led by the Senate President, Dr Ahmad Lawan and the Speaker of the House of Representatives, Femi Gbajabiamila met on Tuesday and agreed on supplementary budget for COVID19 vaccination and procurement of military hardware.