HomeCommentaryNow that Twitter is banned, will kidnapping of Nigerian students stop?
Commentary

Now that Twitter is banned, will kidnapping of Nigerian students stop?

For the first time in a long while, the Nigerian government suddenly came alive after Twitter deleted President Muhammadu Buhari’s tweet on civil war.  As many Nigerians were still wondering if the news report was fake or real, Information Minister Lai Mohammed accused the micro-blogging platform of being selective and bias. Shortly after that, government announced the suspension of Twitter operations in Nigeria.  Before people could get out of the shock, government came up with a directive to all broadcast organisations in Nigeria to deactivate their Twitter handles immediately.  Before then, the Attorney General and Minister of Justice had said that any Nigerian that used Twitter would be prosecuted.

Almost simultaneously, Foreign Affairs Minister invited all the envoys of the countries that issued a joint statement to condemn the Federal Government’s action, to a meeting in Abuja.   Everything has been happening at a fast pace.  It’s so interesting that a government that has hitherto been accused of being indifferent especially to critical national issues could be so swift in galvanising major government organs at different levels to speak on a mere social media platform.  In less than 72 hours, the ministers of information and foreign affairs had reacted; the Director General of the National Orientation Agency spoke, the Acting Director General of the National Broadcasting Corporation issued a release as pro-government apologists dominated different social media platforms justifying government’s action.

From the way this government and its aides have been talking, it seems Twitter is the beginning and the end of Nigeria’s security problems. Twitter is probably behind the high level of insurgency in the country, who knows, the platform could be fuelling series of abductions and kidnappings that have become the lot of Nigerians in recent times. Some government officials have even gone to the extent of saying that it is better not to be on   Twitter than to lose Nigeria. They said Twitter was out to dismantle the Nigerian entity. This line of argument is the one that sounds most intriguing to me most. I am like if Twitter is strong enough to dismantle Nigeria, shouldn’t that suggest that we probably didn’t have a country in the first instance?

Anyway, the lesson from all of this  is that this government is not as deaf and dumb as some people think it is. Rather, it decides what is important to it and it treats such based on its own definition and understanding alone. Banditry and kidnapping has become the biggest criminal enterprise across Nigeria with hundreds of Nigerian students being kidnapped.    From reports, between December 2020 and May 2021, almost one thousand students have been kidnapped from their schools. More than 300 boys were kidnapped  in December from a school  in Kankara,  Katsina, President Buhari’s home state;  279 schoolgirls  were kidnapped from Jangebe village in Zamfara State in February;  42 people, including 27 students,  were kidnapped from a Government Science College,  Kagara  in Niger State in February, 39 students  were taken away from Federal College of Forestry Mechanization, Afaka, Igabi LGA, in Kaduna State  on March 11;  20 students of  Greenfield University and two members of staff were kidnapped on April  20,2021, in Kasarami  village, in Chikun LGA of Kaduna State: and the latest is the abduction of  about 200 children from the Salihu Tanko Islamic school in Niger State. 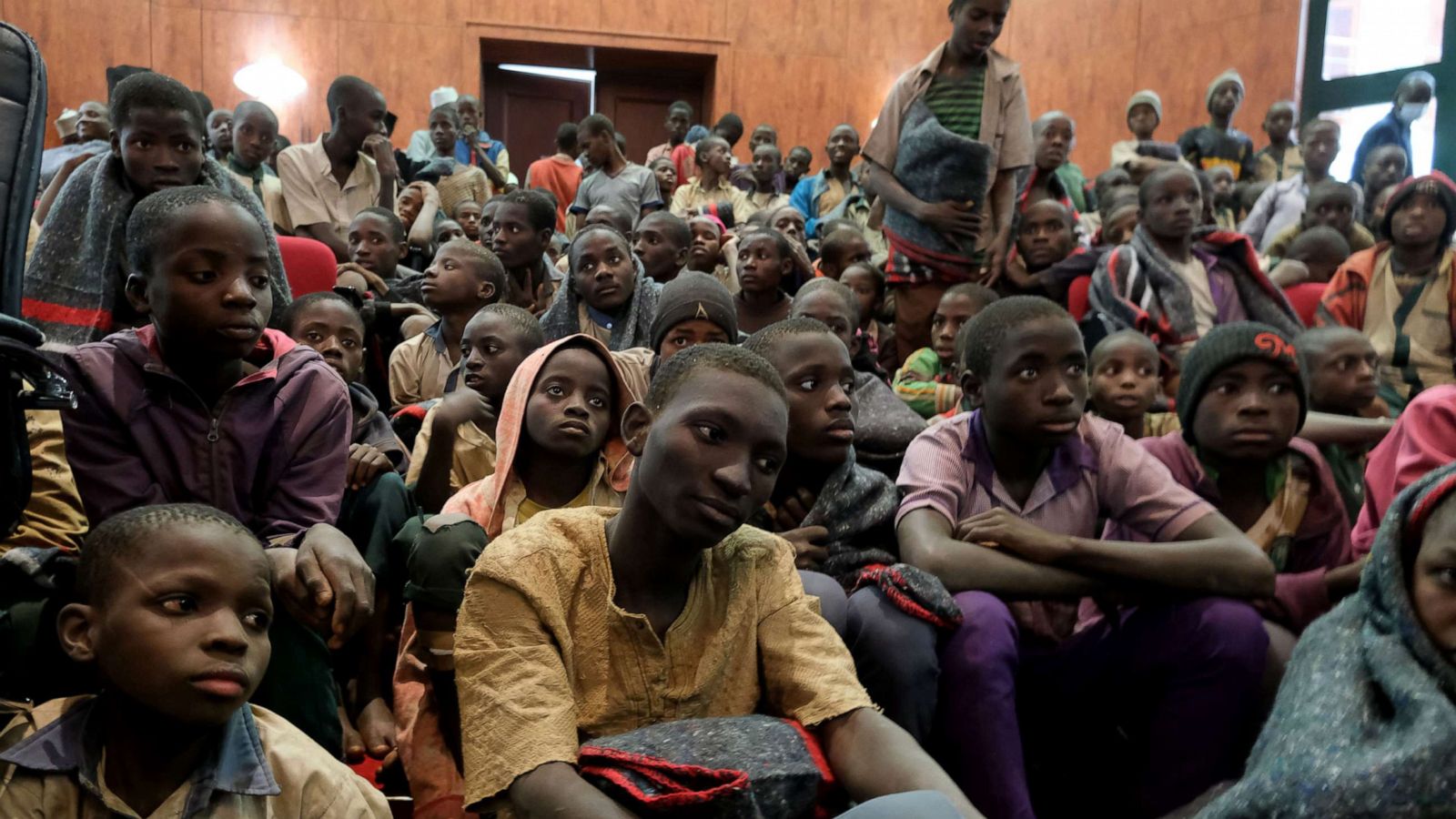 Parents of students of the Greenfield University said they paid N180 million and bought 10 motorcycles for the bandits before their children were released after about six weeks in captivity. Apparently, the Nigerian government did not consider this to be an important issue worthy of its attention as Twitter’s. The kidnapped students’ parents said government did nothing to secure their children’s release. They narrated how they had to borrow money and sell their property to get their children released.

Nobody is even talking about the 200 or is it 135 schoolchildren kidnapped in Niger State on May 30.  The Federal Government has not even uttered a word on the abduction. Our schools are not safe but our government prefers to talk about Twitter than address the real problems confronting the nation.    Of course, these are diversionary tactics – how they think all Nigerians are fools still surprises me though.

A casual look at the state of schools where students are kidnapped shows obvious signs of dilapidation. Nearly all of them don’t have fences. Yet we have state governments and local governments that are supposed to be in charge of these schools. The Federal government also provides intervention through the UBEC ACT.  Two per cent of tax payable by every company registered in Nigeria goes into UBEC fund to finance education. But most of the money belonging to states is still with the Central Bank of Nigeria because they are not ready to contribute the counterpart funding required to access the fund. The governors are even trying to make the National Assembly amend the clause on counterpart funding so that they can collect the money without contributing a dime to the fund and probably spend it on other things aside education.

Yet in the midst of this sorry state of Nigerian schools, we are being told that Nigeria provides the highest number of students in universities and colleges across America compared to other African countries.  According to Susan Tuller, the US mission country consular coordinator, Nigeria ranks 11th on the list of countries with the highest number of students in the US with over 13,000 Nigerians studying in the United States.

Some people will argue that this should be expected after all Nigeria is the largest country in Africa. But it goes beyond that. Besides, such argument would have been tenable if our educational system has been something to write home about. However, we all know that Nigeria’s public school system is a sham. Today’s working class Nigerians are struggling to  fix their children in private institutions. Come to think of it, how many middle class Nigerians, if they still exist, can afford to send their children abroad with an exchange rate of over N500 to $1?

Truth be told, most Nigerians studying abroad are children of politically exposed parents. A February 2021 report from an American foundation, Carnegie Endowment  states that Nigerian politicians are training their children in UK schools with stolen public funds. According to the report, Nigerian politicians and civil servants whose children are paying about £35,000 per year in UK private boarding schools don’t even earn such money. So, how did they get their money?  The report further states that many of the students in the UK schools are children of Nigerians that have either been indicted for corruption or being prosecuted for same.

Can anyone fault this report? It is common knowledge that many people that call themselves politicians in Nigeria today are rogues, same for many senior civil servants. Many of them have gone beyond stealing to looting of public money and pillaging our resources. This is a country where a governor could be denied a second term for failing to give opportunity for political jobbers to fleece his state. Without any iota of shame, Nigerians were told that the governor was good in terms of performance but  was a bad politician. In other words, he was too stingy. He didn’t allow the state resources to be shared.  What a country!

We destroy our own educational facilities and other countries are taking advantage of our precarious situation to make money for themselves. The average cost of college in the United States is $35,720 per student, per year. According to Times Higher Education, Tuition fees could be up to $50,000 per year.  Which university in Nigeria charge this kind of exorbitant tuition?  What stops Nigeria from attracting foreign students too? Why can’t we work towards marketing our own education to other countries?

Before our own eyes, other countries are showing us how foolish we are and we are not bothered.  While we are busy fighting Twitter, these countries are busy looking for ways to make us bring our money to their shores. They have studied us and realised that we are selfish; our leaders and their allies would rather steal from government coffers to guarantee a space for their children in schools abroad than to develop a system for the good of all. The United Kingdom, Canada, US and many of these countries have turned their education to exports targeting Africa. As usual, Nigeria is the main target and we have not disappointed them.

All that the United States is doing is marketing its schools to Nigerians. The US mission has said that it would continue to prioritise Nigerian students with admission to schools in the US because it knows the implication of such influx of money to its economy.

The pandemic which has affected visa appointments notwithstanding, the US Mission in Nigeria is saying it would continue to offer interviews to every single Nigerian who’s been approved at a US university or college.  In 2021 alone, the US embassy in Abuja and the Consulate General in Lagos have interviewed over 5,000 Nigerian students. This shows that America will do everything possible to get its own fair share of Nigerian students in its schools.

Which is more expensive?  Overseas education for just a few, payment of ransom, or developing and securing Nigerian schools?  My humble advice to the Nigerian government is that they should leave Twitter alone and concentrate on solving the security challenges confronting the nation which has made Nigeria an unattractive destination to the rest of the world. It should work on making its educational system world class so as to attract others to its shores. Honestly, being the country with the highest number of international students in US in Africa can only be a thing of pride if we also have Americans studying in Nigerian universities. Anything short of that is simply a proof of our country’s foolishness!