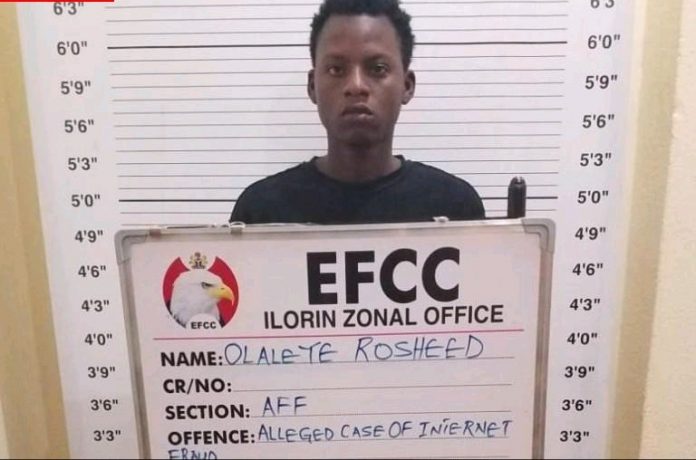 He was sentenced by Justice Sikiru Oyinloye of the Kwara State High Court sitting in Ilorin.

Olaleye was prosecuted on one-count charge by the Ilorin Zonal Command of the Economic and Financial Crimes Commission, EFCC.

The charge sheet read; “That you, Olaleye Rosheed (Christiana Lopez) sometime in January,2021 at Ilorin within the jurisdiction of this honourable court, pretended to be one Christiana Lopez, a white female with a gmail account christianalopez 105@gmail.com and thereby committed an offence contrary to Section 95 of the Penal Code and punishable under Section 324 of the same Penal code.”

The defendant pleaded guilty when the charge was read to him in court.

Following his plea, the Counsel to the anti-graft agency, Sesan Ola reviewed the facts of the case through an operative of the commission, who narrated how intelligence led to the arrest of the defendant on July 24,2021.

The witness told the court that several fraudulent messages printed from Olaleye’s email, including the iPhone recovered from him at the point of arrest, were tendered and admitted in evidence.

Delivering judgement, Justice Oyinloye said “I have carefully considered the facts and circumstances of this case, especially the lone count charge, the plea of guilt entered by the defendant, his extra-judicial statements and unchallenged testimonies of the prosecution witness.

“This honorable court holds the view that the prosecution has succeeded in proving its case beyond reasonable doubt.”

“This court finds the defendant guilty of the allegation levelled against him and he is hereby convicted,” the trial judge declared.

After listening to the plea made by the defence counsel, Justice Oyinloye sentenced Olaleye to one year imprisonment with an option of N200,000 fine.

The iPhone recovered from him was also forfeited to the Federal Government.