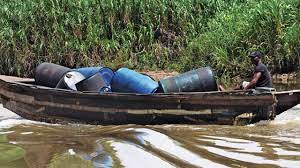 The Nigerian Upstream Petroleum Regulatory Commission (NUPRC) says it has developed key initiatives aimed at reducing crude oil theft and illegal artisanal refining.
Gbenga Komolafe, Chief Executive Officer, NUPRC, said today, Thursday at the Lagos Chamber of Commerce and Industry (LCCI) ‘Public-private dialogue on crude oil theft and artisanal modular refineries’ in Lagos.
Komolafe said Nigeria lost at least $1 billion in the first quarter of 2022 due to oil theft.
An unusual level of theft estimated at a daily average of 103,000 barrels which was recorded in 2021 had grown to 120,000 barrels in the first quarter of 2022.
He also said the daily average production in 2021 stood at 1.5 million barrels while the national production advised by the commission was 2.2 million barrels.
“Consequently, only 58 percent of the technical rate was achieved in 2021 and similar performance has continued in 2022 hence the need for more concerted efforts across all quarters to stem the tide,” he said.
“Unfortunately, the amount of oil received at the terminals indicates that over one million barrels of oil are lost to crude oil theft, amounting to a loss of $1 billion in the first quarter of 2022.”
The CEO further said the effect of this level of theft had resulted in the declaration of force majeure, shortage of wealth, a hostile, unsafe environment, and was a disincentive to investors in the Nigerian upstream sector.
He added that many operators had deliberately shut down facilities and pipelines which further aggravated the low oil production and also impacted gas production both for domestic utilisation and exports.
Meanwhile, he said the commission has made efforts to tackle these challenges faced in the oil sector and enable the industry to deliver a production target of three million barrels daily in three years.
Komofale added that the initiatives were also aimed at mitigating oil theft and creating enabling regulatory environment for local refining in Nigeria.
“The initiatives include a roadmap for tackling the insecurity challenges in the industry, identifying and implementing areas of collaboration between government and operators in ensuring that operators realise their full production potentials,” he said.
“Others are a massive collaboration with the top civil echelon of the Nigerian security forces for robust security for both operators and host communities.
“The commission is also promoting the implementation of modern security technology for real-time loss detection that would enable swift and more proactive responses.

“We also advocate a refinery regulation in terms of establishment of more modular refineries to curb activities of artisans from refining crude which is outside the ambit of the law and absolutely below acceptable minimum standards of technology in the 21st century.”
On his part, Michael Olawale-Cole, president of LCCI, said his concerns over Nigeria’s battle in recent years are the dwindling revenue, security challenges, weak infrastructure, rising inflation, high cost of production, and a burdening and unsustainable fuel subsidy.
He also said that crude oil theft had taken a worrisome dimension, with losses from pipeline vandalisation and theft overwhelming the International Oil Companies (IOCs).
Olawale-Cole added that the development had led to several indigenous oil firms contending with rising operational expenses driven mostly by personnel, maintenance, and security costs.
He also raised concerns about the culpability of the nation’s security agencies, noting that barges of oil could not be stolen and moved on the coastal waters without the collaboration of some powerful stakeholders.
“The menace of oil theft has become a national disaster and a critical threat to our revenue base as Nigeria is losing crude oil at the level of about 91 percent of output,” he said.
“Nigeria lost $3.2 billion to crude oil theft between January 2021 and February 2022, as revealed by the NUPRC, the LCCI Oil Producers Trade Section, and the Independent Petroleum Producers Group (IPPG).
“This menace has prevented Nigeria from meeting its crude oil output capacity,” he said.
Olawale-Cole, however, said the commission remained supportive of the removal of fuel subsidies and full deregulation of the petroleum downstream sector to attract required investments into the sector.