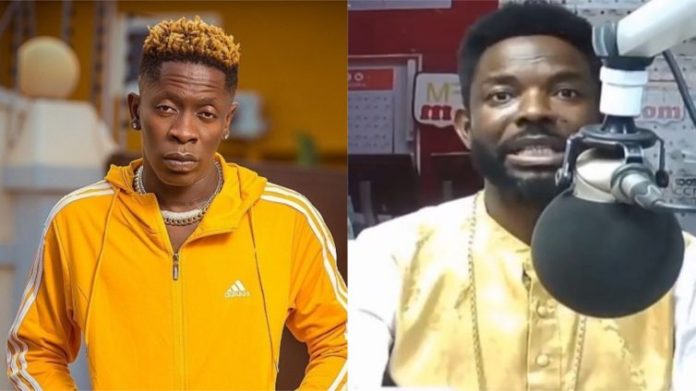 A Pastor, who reportedly prophesied about the shooting and death of dance hall artiste, Charles Nii Armah Mensah, popularly known as Shatta Wale ,has been arrested by the Ghanaian police.
Policemen from the Accra Regional Command arrested Stephen Akwasi, the founder and leader of New Life Kingdom Chapel International, at the premises of Accra FM on Tuesday morning .
The preacher, popularly known as Jesus ‘Ahuofe’, was at Accra FM for a radio interview.
The arrest of the pastor was confirmed by police sources at the national headquarters of the Ghana Police Service and the Accra Regional Police Command.
The sources indicated that the arrest was linked to the prophecy that Shatta Wale, was to be shot dead on October 18, 2021.
Jesus Ahuofe was seen in a video claiming the dance hall musician Shatta Wale would be shot.
On Monday, October 18, 2021 there were reports that Shatta Wale had been shot by some unknown gunmen.
A publicist of Shatta Wale, Nana Dope, was reported to have claimed the musician was ambushed by some unknown gunmen at East Legon but the artiste managed to escape amidst gunshot wounds.
Later, the police service issued a statement indicating that they were investigating claims of Shatta Wale being shot by unknown gunmen.
Shatta Wale in a Facebook post on Tuesday explained that the shooting incident was a prank.
Making reference to the prophecy by Jesus Ahuofe that he would be shot dead on October 18, 2021 he said he expected the security services to give him protection following the prophecy.
He said he deliberately took the phones of his team members to publish the fake news about the shooting.
He went ahead to apologise.
Superintendent Obeng, said the police had ruled out any attack on the musician even though they were yet to find the whereabouts of Shatta Wale.