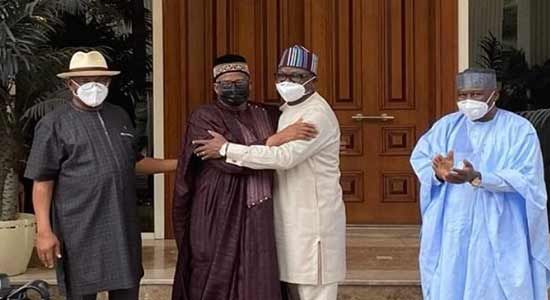 Governors under the umbrella party of the Peoples Democratic Party (PDP) have on Friday held a closed-door meeting at the government house in Makurdi, Benue state capital.

Samuel Ortom, Benue governor, received some of the governors at the MaKurdi Airport who were in the state to attend the party’s governors’ forum.

Uche Secondus, national chairman of the PDP, and Babangida Aliyu, former governor of Niger, were also received at the airport by Ortom.

Aminu Tambuwal of Sokoto State, chairman of the PDP Governors Forum, Ifeanyi Ugwuanyi of Enugu state, and Duoye Diri of Bayelsa had arrived on Thursday ahead of the meeting.

Senator Gabriel Suswam and other Benue State government officials were at the airport with the Ortom to receive the governors.