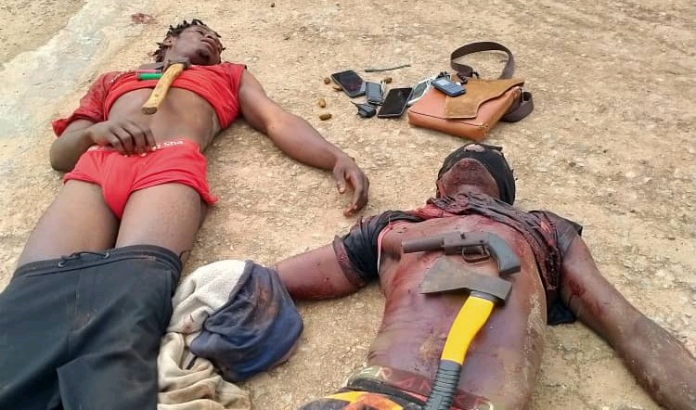 The two suspects met their Waterloo when policemen in Ewekoro divisional headquarters received an information at about 7:30 am, that some armed hoodlums with face mask were sighted hibernating in a bush at the back of ICT polytechnic Itori.

The Police Public Relations Officer in the state, DSP Abimbola Oyeyemi who told journalists on Monday said, the anti robbery team of Ewekoro division was quickly dispatched to fish out the hoodlums.

Oyeyemi explained that, on sighting the police, the gang opened fire on them and the policemen engaged them in gun battle which lasted for about 40 minutes.

He said at the end of the encounter, two members of the syndicate were gunned down while others escaped with varying degrees of gunshot injuries.

Meanwhile, the Commissioner of Police, CP Edward Awolowo Ajogun who commended the gallantry display of his men, has warned criminals to stop testing the will power of the command under his watch, because doing so will continue to spell doom for them.

The CP also directed a massive manhunt for the fleeing members of the gang.

He therefore reiterated the stand of the command to roll out all in its arsenal to wage war against crime and criminality in order to make Ogun state free of violent crime.