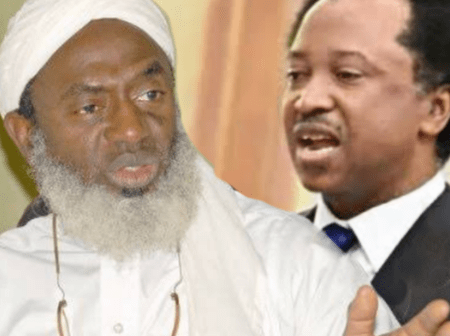 Former Senator who represented Kaduna Central in the 8th Senate, Shehu Sani, on Monday met with Sheikh Ahmad Gumi in Kaduna to help rescue the 39 Afaka students kidnapped earlier in the month by bandits.

The senator also sought the release of the eight members of the Redeemed Christian Church of God kidnapped on Friday.

The tweet reads: “Earlier today in Kaduna, I visited the home of Sheikh Dr Ahmad Gumi where I appealed to him to help to secure the release of the 39 Afaka Students and members of the RCCG and their Pastor who are still in the hands of Bandits.”

It would be recalled that Gumi once visited bandits in a bid to stem the tide of kidnapping.

Sani’s appeal to Gumi was apparently to exploit the link between the Islamic leader and the bandits.

The police in Kaduna State are said to be working on how to rescue the members of the  RCCG held by bandits since Friday.

The bandits who were reported to have contacted the leadership of the church were said to have requested N50 million ransom.

The 39 students of the Federal College of Forestry Mechanisation, Afaka, in Igabi local government area of Kaduna State, are also yet to gain their freedom.

They were kidnapped when a large group of armed bandits attacked the school.

The military rescued 180 of the students while the bandits escaped with 39.

The government appears not ready to pay ransom for the release of the abducted, arguing that that would amount to encouraging the bandits in their evil way.