Toyin Abraham praises on husband after avoiding a kiss on set 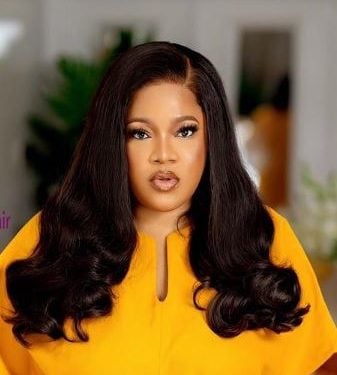 Nollywood actress and film producer, Toyin Abraham, has heaped praises on her husband, Kolawole Ajeyemi, for avoiding a kiss from her on a film set.

The ‘Alakada’ star praised her husband for being professional while filming the couple’s upcoming feature, The Ghost and the Tout.

In a short video shared by the mother of one on her Instagram page, Abraham-Ajeyemi was seen helping her husband out with a continuity role and tried kissing him afterwards but he evaded her mouth and lips leaving the actress to order the continuation of the shoot.

She said though she felt shunned by her husband for refusing her kiss, she appreciates his dedication to work. “Ayé le ó! I was only trying to be romantic but ọkọ mi gbé mi ní handicap ni sha! But kò sí problem! @kolawoleajeyemi ọkọ mi, thanks for being so professional.”

Abraham-Ajeyemi and her husband have a son together while Ajeyemi has a daughter in his previous relationship.