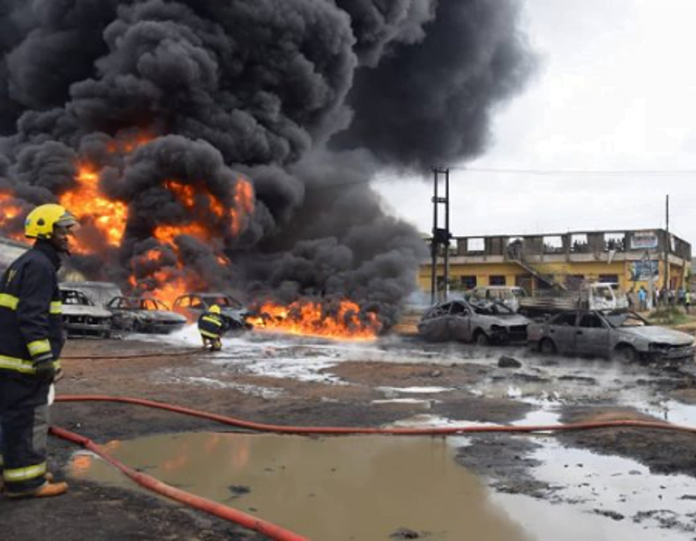 Families of victims affected by the gas explosion that occurred at Mobolaji Bank Anthony Way in Ikeja, Lagos, on Thursday night have expressed grief and panic over not knowing the whereabouts of their loved ones.

Authorities have confirmed five deaths while 13 others were severely injured by the explosion.

Family members of victims, who spoke with Af24news, said that they were still searching different hospitals for their loved ones but have made little progress locating their whereabouts.

One of those in this category is Mr Ismail Yunusa.

According to him, his sister has been working as a security guard at OPIC Plaza for over a year before the tragedy.

He said, “I came to the place with my sister’s picture and some of her colleagues said she wasn’t dead, but that she was badly burnt, and has been taken to the hospital. But I don’t know which hospital they took her to. I don’t know the extent of the damage.”

Yunusa further disclosed that he spoke with his sister, Mercy, a few hours before the explosion.

He added, “I spoke with my sister around 10:00pm. She told me she was through with her shift and that she would be heading home soon.

“Around midnight, I got another call that OPIC Plaza was on fire. I didn’t believe it, I thought it was a joke.

“I called a neighbour that works there, he confirmed the fire incident to me.

“I called my sister but someone else picked the call and told me that something had happened to her.

“The person said that they picked people’s phones, bags, money and shoes to keep them safe. They told me to come and meet them at Isaac John in Ikeja GRA.

“So I went there to meet them. I saw many shoes, bags, phones and money they all picked and kept for the owners but I didn’t see my sister.

“I am really worried and confused. I just pray she is somewhere, alive.”

A relative of another victim complained of the shoddy treatment meted out to people that came to inquire about people working at the plaza.

“I came here to find out what happened to my brother who works at OPIC Plaza but no one is giving me answers,” said Mr John Ademola. “They only told us that we should go and look for him at the General Hospital but no one knows the particular hospital.

“I have gone to the surgical emergency areas in LASUTH but I was told to go and check at Gbagada General Hospital. I pray I see him there.”

Also business operators inside the plaza expressed apprehension over the losses they suffered as a result of the incident.

One of them told Af24news that they were yet to ascertain the extent of damage on their shops.

“I have an office on the first floor in the plaza,” said Mr Rotimi Abe. “I need to go in and see how the explosion affected my office. But the security and the OPIC management won’t allow me to enter. Looking from outside I can see the windows are all shattered but I need to go in to see what I can salvage before it is too late,” he added.

Also at the scene of the explosion, burnt vehicles were seen inside the premises of OPIC Plaza. Some of the car owners were counting their losses at the time our correspondent visited the area.

“I am in shock,” said Mr John Adedamola, who said his Toyota Corolla was destroyed in the explosion.

Adedamola said, “This whole calamity happened within a twinkle of an eye. I parked my car in the evening in the plaza before the explosion happened. We thought it was a bomb. We called 911 but they came almost two hours after the explosion.”

Another car owner, Mr Olushola George, said his Lexus SUV was also burnt to a shed.

“I normally park my car here in OPIC and go home. I woke up this morning to hear of the explosion. You can see the extent of damage on my car. I just bought the car this year,” he lamented.