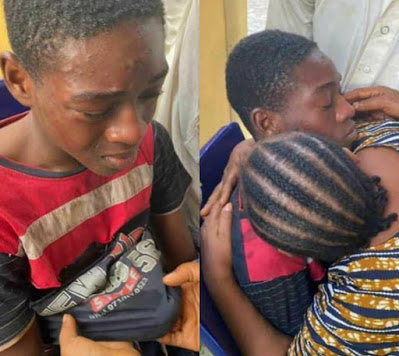 A 13 – year-old-boy, Gbolahan Ajibola, who was abducted by kidnappers in Ogun State has finally regained his freedom.

Gbolahan was kidnapped on April 11 at his residence in Destiny Estate, Obada-Oko in the Ewekoro Local Government Area of the state.

The Ogun State Police Command confirmed his release via a statement issued on Tuesday by its spokesman, Abimbola Oyeyemi, adding that the victim has since been reunited with his family members.

In the video, Gbolahan’s relatives can be seen ecstatic as a Sienna bus that carried the teenager back approached them.

It was gathered that the gunmen about six in number laid ambush on Ajibola’s family as they were returning to their house on Saturday night.

The victim and his family were returning from their shop after attending the Redeem Christian Church of God programme where the General Overseer of the church, Pastor Enoch Adeboye had ministered.

According to reports, the kidnappers concealed themselves in a nearby bush close to the victim’s house and pounced on the family when Ajibola alighted from his mother’s car to open the gate.

The kidnappers are said to have reached out to the family of the abducted boy demanding ₦50m as ransom.

However, It is not known whether the sum was paid.