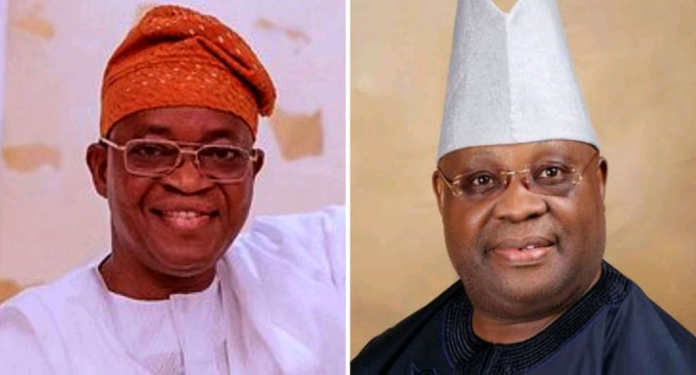 The declaration of Senator Ademola Adeleke as the new governor-elect of Osun State on the platform of the Peoples Democratic Party by the Independent National Electoral Commission may be challenged in the law court as sources disclosed that the All Progressives Congress legal team has started working on the legal process.

It was gathered that the APC has hired senior advocates in the legal profession and legal icons in the state to challenge the PDP’s victory in court if anomalies are detected in the results announced by INEC on the outcome of the just concluded governorship election.

Informed sources hinted that some of the legal practitioners to be engaged for the assignment had been contacted and are now mapping out strategies on how the matter would be approached.

Already, the legal team is said to have started with the thorough scrutiny of some results from the polling units with intention of challenging them in court if irregularities are discovered at the end of the day.

A legal icon in the party and the director-general of Oyetola’s campaign organisation in the last election, Senator Ajibola Basiru, confirmed the development.

He said, “We want to thoroughly examine the outcome of the results from one polling unit to the other to ascertain how to approach the case”.

The legal luminary also hinted that in no distant time, they would forward a letter to the electoral body to demand certified true copies of result sheets for them to compare them with the ones signed by polling agents, adding that he would reserve further comments on the matter until they are through with the preliminary legal work.