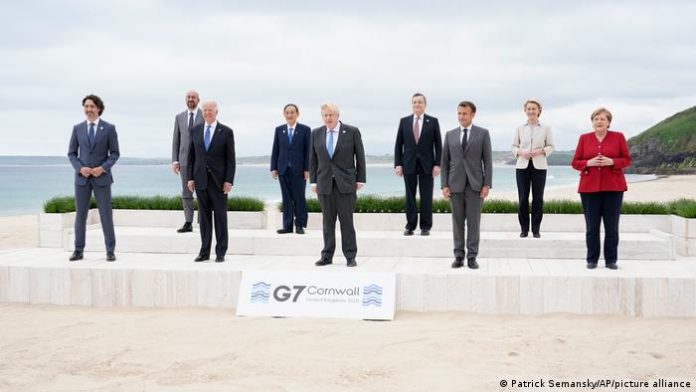 President Joe Biden and first lady Jill Biden greeted G7 leaders on the beach in Cornwall Friday for the official start of the summit to rebuild relationships that were ‘frayed’ during four years of President Donald Trump.

‘Everybody in the water,’ Biden joked to the press as greetings were underway.

Johnson suggested they gather for a group picture.

‘Okay, here we are folks – right. Everybody here? Alright, we’ve got it,’ Johnson said as photogs snapped socially distant pictures.

The first lady changed from a white dress and pink blazer into a red dress for the family photo.

READ ALSO: Jeff Bezos Is Once Again The Richest Person In The World After Two Weeks At No. 2

Biden was also asked about his message to Putin, who he’ll meet next week in Geneva, Switzerland after a stopover in Brussels, Belgium for a NATO meeting.

‘I’ll tell you after I deliver it,’ the president told reporters.

During the summit the leaders will pledge 1 billion shots in arms of the COVID vaccine for the world, support a 15 per cent global minimum corporate tax, and target Big Tech with a new tax.

Of those billion shots, half will come from the United States and 100 million from the U.K.