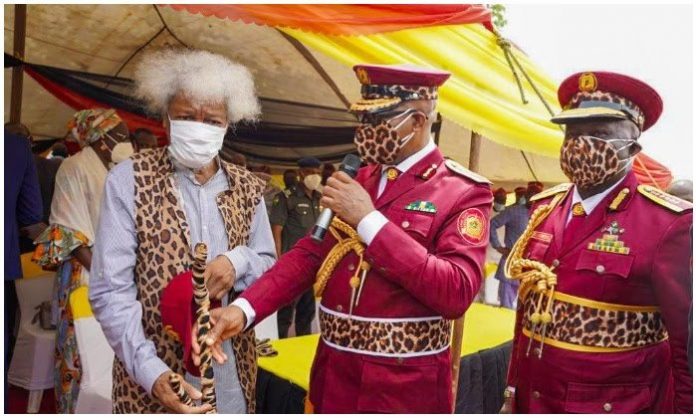 Ogun State Governor, Dapo Abiodun, on Thursday, decorated Nobel Laureate, Prof Wole Soyinka, as the Super Marshall of the Ogun State Security Network codenamed Operation Amotekun.
Abiodun decorated the respected academic with some emblems of the Amotekun Corps during the inauguration of the security outfit in the state.
The governor also commissioned scores of patrol vans and motorcycles to aid the operations of the Amotekun Corps.
While decorating nobel laureate, the governor said, “This outfit is very close to his (Soyinka’s) heart and issues of security particularly in the South-West.
“On that note, I have a singular honour and privilege to present prof some of the Amotekun insignia being the Super Marshall of Amotekun in Ogun State.”
The herdsmen crisis in parts of the Ogun State has been disturbingly worsening in recent times with many residents of Yewaland displaced in far away Benin Republic.

Agrarian villages in Ogun have also suffered unnumbered killings by Fulani herders who have also been accused of rape, kidnapping, amongst other unprintable crimes.
The security challenges confronting the state seemed overwhelming for the men of the Nigeria Police Force, thus, necessitating the support of a law-backed security outfit like the Amotekun Corps.
The six governors of the South-West had inaugurated the Western Nigeria Security Network also known as Operation Amotekun last years to tackle peculiar security threats in the region.