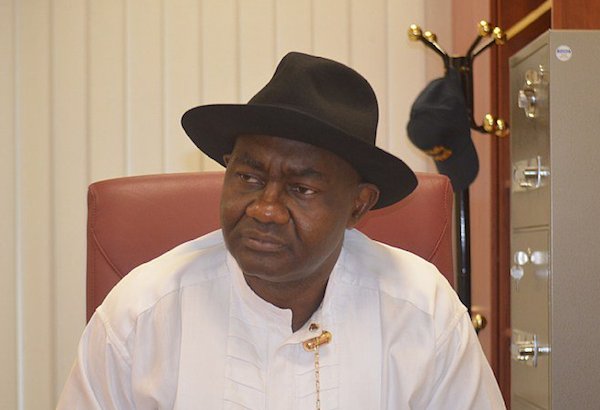 Former Senator representative Rivers South-East Senatorial District at the National Assembly, Magnus Ngei Abe, has said the statement credited to the Minister of Transportation, Rotimi Chibuike Amaechi that the governorship ticket of the All Progressives Congress has been zoned to the riverine part of the state was his personal opinion.
He described the Minister’s declaration as a Greek gift to the riverine people and a poisoned chalice which is bound to fail.
Abe said this during an interactive session with members of the party in Port Harcourt, where he stressed that zoning the governorship ticket of the party is a process.
According to him: “The people that are being zoned in must understand why it is zoned to them and the people that are being zoned out, must also understand why they are being zoned out.
“If you just stand and carry a microphone and begin to zone and unzone, everybody knows what you are doing. And so long as it is singularly done, I want to stand here and say that it will not work.”
The APC Chieftain equally opined that the Minister intended to deceive the riverine people by making an uncoordinated promise to them without first laying a proper foundation which is the basis of victory, and wondered how one individual intended to pit a section of the state against the others.
He said, “I want to stand here and say that the riverine people I know are smarter than those who are trying to use them. It is a poisoned chalice, it is a Greek gift, and it will profit nothing because it is not well-intentioned.”
He assured Rivers people that no single tribe, group or individual can produce the governor of the state single-handedly without the direct involvement of other parts of the state.
“No tribe nor group in Rivers State can produce a governor without the co-operation and consultation with other groups in the state. No one individual has such power and definitely, the former Governor (Amaechi) does not have that power as far as Rivers State is concerned.
“There is no way any of us will grow bigger than the people of Rivers State. The state remains the foundation of our power as leaders. And Rivers people are the only route through which we can gain access to power and we must respect them. The respect we give them is the respect they will show us.
“How can anybody get up in a party where we are to do registration, we have not even concluded the registration, we have not chosen one Ward Chairman, Ward ex-officio, Local Government Area Chairman or State Party Chairman and even before any of these, somebody had come out to zone the governorship ticket of the party, is that sensible political action?
“Will that aid the APC to win elections in the state? It is an action doomed to lead to another round of failure, we as party men and women should not allow it,” he declared.
Senator Abe urged the party members to be steadfast and resilient in the party, saying they will no longer be unjustly treated by anyone no matter how highly placed.
“I called to encourage all of you. I know that you have been battered economically, not just by Covid-19, but by the wrong politics and policies within the party. It is time to put away all the anger, get back to your wards and begin the important process of rebuilding our party (APC). Don’t mind what they are doing, ignore them completely, because everybody who is a politician can tell between serious politics and grandstanding game-manship.
“Grandstanding game-manship will lead us to nowhere, serious politics of mobilization and involvement of Rivers people will lead us to our destination.

“I want to assure you that our destination is clear we are unfazed and our commitment remains unshakable.

“Go back home and do not be afraid. In politics, the people are the ultimate power and you are the people. We have the capacity to mobilize the people and we will mobilize when the time comes. So nobody should quake, don’t shake, don’t be upset, don’t be angry. Cease quarrelling with anybody, because you need everyone who is a potential voter to support the party, so be at peace with everyone”.
The frontline former national legislator also told the party members to ensure that they rally more support at the grassroots for the party and sustain their beliefs in the sanctity of the tenets of the party’s constitution.
The event had party members drawn from the 23 LGAs of the state and other party leaders.