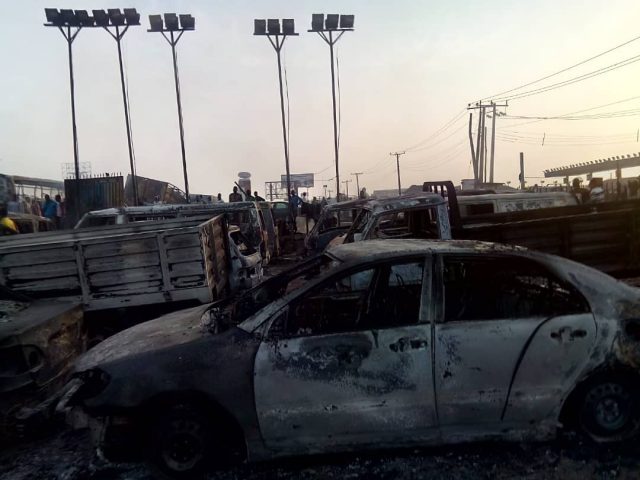 There is heavy gridlock on the Lagos- Ibadan Expressway as a result of a n accident in the early hours of Saturday.

At least two persons have reportedly died and 29  vehicles burnt in an early morning accident which occurred at Kara Bridge on Lagos-Ibadan Expressway.

The accident occurred at about 1 am. As of 12 noon Saturday, the bridge was still heavily congested as vehicular movement became impossible.

It was learnt that a petrol-laden truck crashed near the Royal Oil Petrol Station along the Expressway where several other trucks and vehicles were parked resulting in the  fire.

However, the fire did not affect the petrol station.

The Corps Marshal, Federal Road Safety Corps, Dr. Boboye Oyeyemi, confirmed  that two people died in the accident   in a statement. He said they were male adults who were burnt beyond recognition.

He said twenty-nine vehicles parked by the road side were also burnt.

Oyeyemi said that the inferno was caused by a lone accident involving a tanker laden with petrol that lost control of the wheels as a result of mechanical deficiency.

The tyre of the tanker blew out making the tanker to fall on the expressway amidst a wild inferno.

He said the fire has since been put out while the backlog of traffic is easing up.

Among the vehicles burnt were two trucks owned by Dangote Industries Limited and used cars, popularly known as Tokunbo, which were in a car mart close to the scene of the accident.