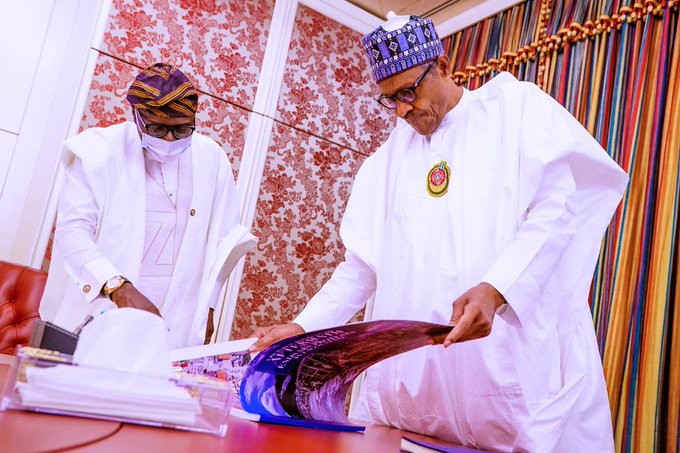 Lagos State Governor Babajide Sanwo-Olu on Friday took the photos of destruction of properties resulting from the hijack of #ENDSARS protests in Lagos to President Muhammadu Buhari.

According to the governor, the meeting with the President was also aimed at discussing how to rebuild Lagos.

The governor on his twitter handle at Gov. @jidesanwoolu on Friday tweeted “Presents Pictorial Report of the Aftermath of the hijacked EndSARS Protest in Lagos to President  @MBuhari in Abuja, on Friday, November 6, 2020.

“The meeting was to discuss the ‘Rebuild Lagos Project’ with the president after presenting an album of wanton destruction of public and private assets in the State following the recent hijack of the #ENDSARS protest.”

Similarly, President  Buhari tweeted via @MBuhari that, “this afternoon met with Governor @jidesanwoolu of Lagos. The Governor presented a Report on the extent of the destruction suffered by Lagos State in the aftermath of the ENDSARS protests. #AsoVillaToday.”

A similar report on the aftermath of the #ENDSARS protest by the ministers from the South-west zone of the country was presented to the president during the Federal Executive Council on Wednesday.

The Minister of Works and Housing, Babatunde Fashola, submitted the report on behalf of the affected ministers where they urged the Federal Government to support Lagos State to restore damaged facilities.

They particularly appealed for the immediate repair of those facilities related to the maintenance of law and order, and the administration of justice such as police stations, court buildings and forensic laboratory in the state.

Buhari had on October 21 sent members of the Federal Executive Council to their home states, with a view to solicit the support of stakeholders including political, traditional, religious and community leaders against the violence that emanated from #EndSARS protests.