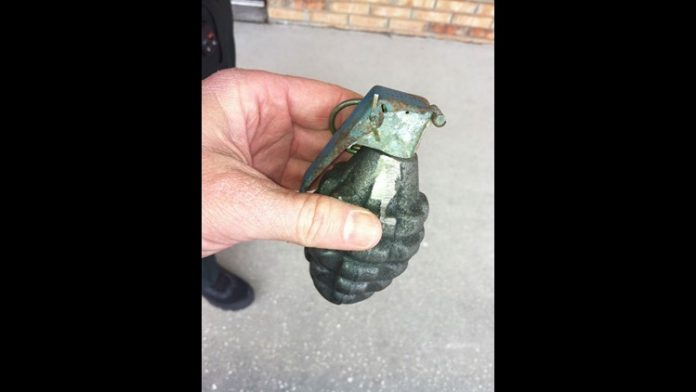 A  bomb squad dashed to a school after a pupil brought a hand grenade into a history lesson.

A group of students and their teachers were ordered to evacuate part of Parkside Community School in Chesterfield during the scare at 11am yesterday.

The grenade was examined and the bomb team confirmed the weapon had been decommissioned.

Pupils were allowed back into the school a short while later. It is understood the old grenade had been brought in by a Year 7 pupil.

Some parents expressed their anger on social media that the school did not inform in the immediate aftermath of the incident.

Charlene Kirton posted on Facebook: ‘We were sent a link after the school day had finished but it happened at 11am. We could have been told earlier I think.’

Another parent, Sarah Carnell, added: ‘I didn’t get the text until they were coming out of school.’

Sophie Millan posted on Facebook: ‘My sister-in-law received the message telling her. The kids didn’t get sent home though or told to evacuate the building, which is ridiculous considering the potential consequences.’

A Derbyshire Police spokesman said: ‘We were called at 11am yesterday by the school as a student had brought an old hand grenade into a history lesson.

‘Part of the school was evacuated while the military EOD team was contacted. The team attended and examined the item, confirming it had been decommissioned.’