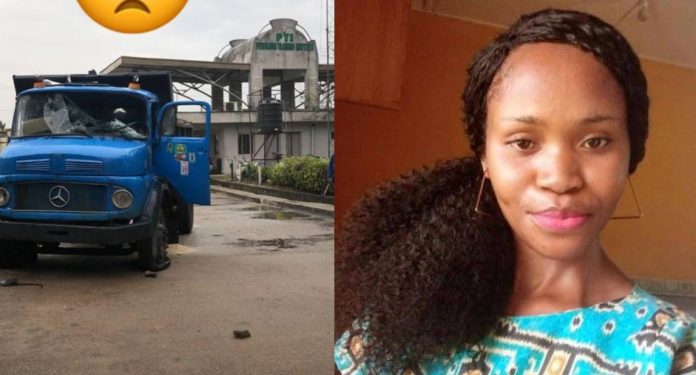 A final year female student of the Petroleum Training Institute (PTI) Effurun, Uvwie council area of Delta state was crushed to death by a tipper truck on Friday evening.

It was gathered that the incident occurred around 8 pm at the main gate of the institution.

The student, identified simply as Uwa, was trying to cross the road when the truck, without headlights and driving against traffic, knocked her down.

READ ALSO:  His “strange” birth, other interesting facts about TB Joshua who died at 57

According to reports, she was immediately rushed to a hospital by students and other sympathizers, but later died early hours of Saturday.

Uwa was an HND 2 student of the institution.

The driver of the truck was said to have ran away after knocking down the student to avoid a mob attack. He was later arrested by some security officers just before the popular PTI Junction.

Following news of her death, angry students blocked the PTI Road in protest of their loss for several hours on Saturday.

It took efforts of the chairman of the Local Government Area, Ramson Onoyake to calm the students and ensure free flow of traffic on the ever-busy route.