What Akeredolu, Fayemi, Amosun Told Tinubu About His 2023 Presidential Ambition During Visit To London 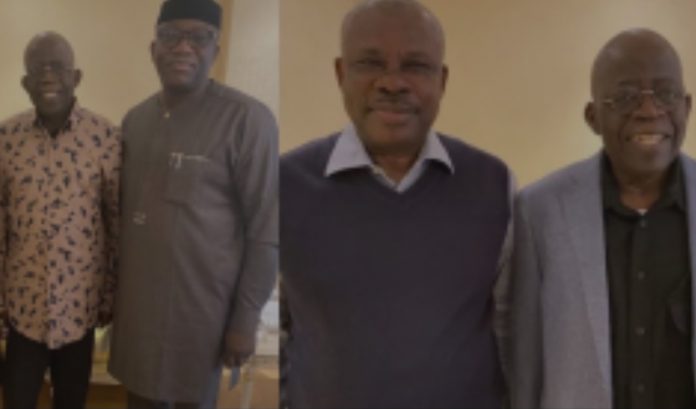 The visits to the National Leader of the All Progressives Congress (APC) and former Lagos State Governor, Bola Tinubu, in London, United Kingdom, by South-West governors, Rotimi Akeredolu and Kayode Fayemi, among others were to “make amends” with the ailing party leader.

SaharaReporters learnt thatthe governors also by the visit tried to convince Tinubu that he needed to “rest” from his much sought after 2023 presidential ambition due to his health condition.

SaharaReporters had on August 26 reported that Akeredolu of Ondo State and his Ekiti State counterpart, Fayemi, visited Tinubu in London.

The two governors among other discussions reportedly touched on political events in the country and the clamour for the South-West presidency in 2023.

“So many people visiting Tinubu are trying to making amends with him out of sympathy for the severity of his ill health. (Former Governor Ibikunle) Amosun was never in talking terms with him before now. (Kayode) Fayemi went to the US and reached out to Asiwaju people to make amends too,” a top source stated.

“Most of them by the visits are also mocking Tinubu and confirming that his presidential ambition is practically over. The Tinubu camp is still upset with the media team of (President Muhammadu) Buhari for exposing Tinubu’s illness to the world,” the source added.

Political supporters and godsons of the APC leader continue to troop to London on a solidarity visit – the latest being the Speaker of the House of Representatives, Femi Gbajabiamila.

Also, a former National Legal Adviser of the APC, Dr. Muiz Banire visited the former governor of Lagos to express solidarity with him and to wish him quick recovery.

SaharaReporters had on August 12 reported that Buhari visited Tinubu in London after his (Tinubu) second surgery at that time.

Tinubu had been seen with a walking stick during Buhari’s visit, confirming SaharaReporters’ story that he underwent a knee surgery at the John Hopkins University Hospital in Maryland, US.

The APC chieftain, it had been learnt, left the US for the United Kingdom on crutches, a few days after the surgery.

SaharaReporters had also reported that sources close to Tinubu said he wanted the surgery in Paris, France but changed his plan over rumours of his death.

SaharaReporters had on July 31 reported that Tinubu, who has had several medical trips this year alone, had a surgery about two weeks earlier and could be billed for another one.

The APC National Leader has been off official and party functions in the country for a while, amidst talks that he is being positioned for the 2023 presidency to succeed the incumbent repressive regime of Buhari.