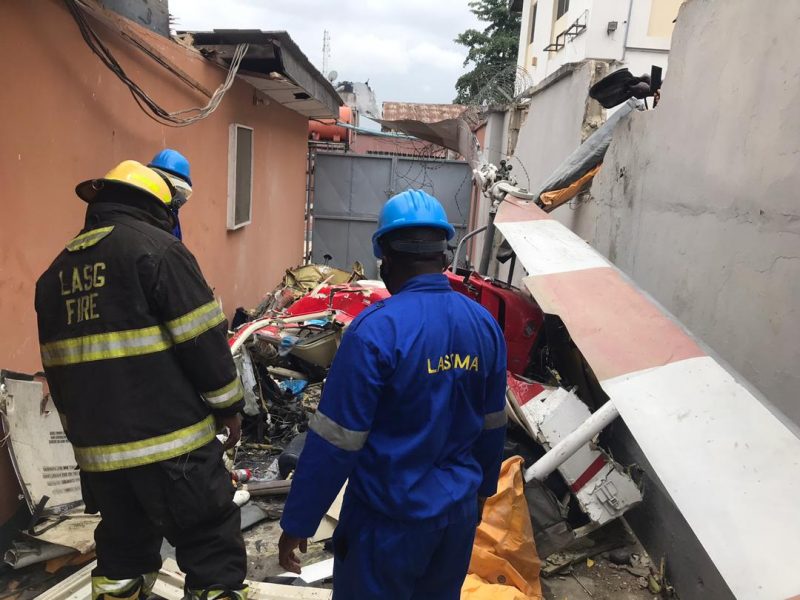 Lagos State Governor,  Mr. Babajide Sanwo-Olu, has visited the scene of the helicopter crash 24 hours after the incident, promising to renovate  the  damaged parts of the buildings.

According to the Governor, the state government will be working with Federal Government agencies to do integrity tests for the houses and also commence the reconstruction and renovation of the places that had been affected by the crash.

He said, “We are taking on the responsibility of renovations and will provide all the necessary support to cushion the effects of this tragic incident,” he said.

The governor, who met with the residents of both buildings where the crash occurred, rejoiced with them for not recording any casualty.

Sanwo-Olu stated that he was out of town when the incident occurred, and made it a point of duty to come and visit the residents before another day passed.

In their response, the owners of the buildings  thanked God and commended the Governor and the Federal Government for their prompt response and urged the government to carry integrity tests on affected buildings as well as sanitise the place.

A Bell 206 helicopter, belonging to Quorum Aviation, was travelling in from Port Harcourt, the Rivers State capital with two crew members and a passenger before it crashed into a residential building in the Opebi area of Lagos at mid-day on Friday.

The AIB said it has commenced an investigation into what led to the crash, with a view to carrying out a fast and robust one with the help of the general public who have clips or saw the helicopter before it crashed.